IRIN/Kate Thomas
The residence of the Prime Minister in Bissau.
11 October 2016

Welcoming the start of an inclusive dialogue among political leaders, civil society and religious communities of Guinea-Bissau today, United Nations Secretary-General Ban Ki-moon encouraged all the parties to engage in constructive discussions and “seize this opportunity for a favourable outcome” in the interest of the country’s people.”

In a statement issued by his spokesperson, Mr. Ban welcomed the dialogue, under way in neighbouring Guinea, as “the crucial first step” in implementing the Economic Community of West African States (ECOWAS) roadmap to end the political crisis, which political leaders agreed to in Bissau on 10 September 2016.

The Secretary-General in the statement thanked the ECOWAS Mediator for Guinea-Bissau, Alpha Condé, President of Guinea, for hosting the parties and leading the regional effort to swiftly implement the roadmap. He further encouraged all parties to engage in constructive discussions and seize this opportunity for a favourable outcome in the interest of the people of Guinea-Bissau.

“He calls on all parties to jointly achieve decisive progress within the coming days, in order to break the political impasse that has prevailed in the country since August 2015,” the statement said.

Mr. Ban has requested his Special Representative and Head of the UN Integrated Peacebuilding Office in Guinea-Bissau (UNIOGBIS), Modibo I. Touré, to continue to work closely with all stakeholders in Guinea-Bissau.

This, he will do in close collaboration with ECOWAS, the African Union and other key partners, including the Community of Portuguese-speaking Countries and the European Union as they work towards political stability in Guinea-Bissau, according to the statement. 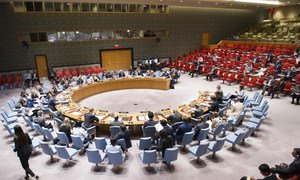 In his briefing to the United Nations Security Council today, a senior United Nations official emphasized the need for Guinea-Bissau’s political leaders to put aside partisan considerations and focus on national interests and the welfare of the suffering population.