Outraged by Saturday’s bombing of a funeral in Yemen, top United Nations officials are strengthening their calls for the establishment of an independent body to probe alleged violations of international humanitarian and human rights laws in the war-ravaged country.

“Since the beginning of this conflict in Yemen, weddings, marketplaces, hospitals, schools – and now mourners at a funeral – have been hit, resulting in massive civilian casualties and zero accountability for those responsible,” the High Commissioner said in a news release issued by his Office (OHCHR) in Geneva.

“This deadly attack comes just weeks after the UN Human Rights Council, for the second year in a row, dismissed my call to take decisive action to create an international, independent investigative body to look into extremely serious alleged violations of international law, including possible war crimes, in Yemen,” the UN human rights chief added.

He stressed that the Human Rights Council’s inability to take decisive action by setting up an international investigation is contributing to a climate of impunity and the occurrence of violations “on a regular basis.”

At UN Headquarters in New York, Mr. Ban told reporters that “aerial attacks by the Saudi-led coalition have already caused immense carnage, and destroyed much of the country’s medical facilities and other vital civilian infrastructure.”

Initial reports from the site of the funeral bombing – “a heartless attack on civilians and an outrageous violation of international humanitarian law” – indicate that “this, too, was a coalition attack,” he said, stressing that “this latest horrific incident demands a full inquiry.” Indeed, he continued: “Excuses ring hollow given the pattern of violence throughout the conflict. Parties cannot hide behind the fog of this war. A man-made catastrophe is unfolding before our eyes.” The UN chief went on to state that “more broadly, there must be accountability for the appalling conduct of this entire year” and that the High Commissioner has “rightly” called for an international independent body to carry out investigations.

The news release said that, according to eyewitness testimony, hospital records and other information gathered by UN Human Rights staff, two airstrikes, about seven to eight minutes apart, hit the packed Al Kubra hall in Sana’a on Saturday afternoon. Hundreds of people were gathered at the well-known community centre for the funeral of the father of a senior official.

Also according to the release, it is unclear how many people were present but the hall has a capacity of up to 1,000 people, and witnesses described a hall packed with families, including children. A large number of political and military leaders affiliated with the Houthis and former president Saleh were among those present, and many were killed. “The international community has a legal and moral duty to react robustly to the increasingly horrific levels of civilian casualties in Yemen, just as it has in many other situations,” Mr. Zeid said. “We take note of the recent letter sent by Saudi Arabia to the Security Council indicating its readiness to take corrective and appropriate measures to ensure accountability, including the release of the results of the ongoing investigations into this incident, in the near future.”

The High Commissioner also called on all States – which are contributing to the conduct of hostilities in Yemen in any way – to seriously reconsider their support to the parties to the conflict, urging all sides to resume dialogue and to work towards a sustainable ceasefire.

According to the release, since March 2015, at least 4,125 civilians have been killed and 7,207 injured in Yemen. The number of casualties has risen dramatically since the collapse of the cessation of hostilities agreement in August. During September 2016, 379 civilians were killed and injured. Already, in just the first ten days of October, the rate has tripled - with 369 civilian casualties. 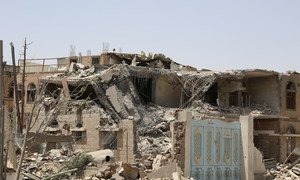 Senior United Nations officials, including Secretary-General Ban Ki-moon, have condemned an attack in the Yemeni capital, Sana'a, that killed more than 140 people and injured at least five hundred more. They also called for swift and impartial investigations into the incident.