The text had received 11 affirmative votes, 2 abstentions (Angola and China), and 2 negative votes (Russia and Venezuela).

The second resolution, proposed by Russia was also not adopted by the Council as it failed to achieve a majority of its members voting in favour.

At the Security Council meeting today, several members also recalled the recent briefing by UN Special Envoy for Syria Staffan de Mistura, who had said that if urgent action is not taken to address the situation in the war-torn country, thousands of Syrians would be killed and towns, such as eastern Aleppo could be totally destroyed by the end of this year.

At the briefing, Mr. de Mistura had also stressed that the International Syria Support Group (ISSG) is a very important entity and that the suspension of bilateral negotiations between the two-chairs – United States and Russia – “should not and will not” affect the existence of the Group. He had also emphasized the importance of the humanitarian task force, as well as the possibility of a body that would effectively and “perhaps more stringently” support future cessation of hostilities.

The UN estimates that five years on, the Syrian conflict has driven more than 4.8 million refugees to neighbouring countries, hundreds of thousands in Europe, and displaced 6.6 million people inside the Syria against a pre-war population of over 20 million. Well over 200,000 people are believed to have died. 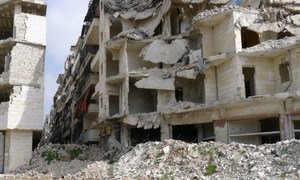 Eastern Aleppo may be ‘totally destroyed’ by end of year, warns UN envoy

Detailing the bloodshed in eastern Aleppo, where in the last two weeks, 376 people – half of them children – have been killed, 1,266 injured, hospitals destroyed, and “all sorts of ammunitions” and weapons used, the United Nations Special Envoy for Syria underscored today that this part of the iconic city may be totally destroyed in two months, leaving thousands dead and forcing countless more to flee.