Welcoming a recent draft bill to the Guatemalan Congress on constitutional justice reform, the Office of the United Nations High Commissioner for Human Rights (OHCHR) today urged a rapid approval by the Government while voicing concern over the growing threats against judicial authorities.

“We hope that the text will be swiftly approved by the Congress, as this represents an historic opportunity to consolidate the remarkable progress the country has achieved in the fight against impunity and corruption in recent years,” Rupert Colville, OHCHR spokesperson, told reporters at the regular bi-weekly press briefing in Geneva.

The proposal aims at improving access to justice; strengthening the independence and impartiality of judges and magistrates; depoliticizing the nomination and appointment of officials in the justice system; and recognizing indigenous peoples’ legal jurisdiction over internal matters, Mr. Colville explained.

Of particular concern, he said, are women and indigenous peoples who have historically faced obstacles. Therefore, the OHCHR office in Guatemala and other national and international rights offices have provided assistance to guarantee that the bill is in line with international human rights standards.

However, “we are really concerned at growing threats against Attorney General Thelma Aldana, who has played a crucial role in the fight against impunity and corruption in Guatemala,” Mr. Colville told the briefing.

He went on to stress the importance of ensuring that human rights defenders work in a secure environment so these crucial reforms can take place. Yet, there are worrying developments such as attacks and even death threats against the country’s judicial authorities.

Since 2016, over 100 attacks against human rights defenders and journalists have been documented, including eight killings, according to OHCHR. 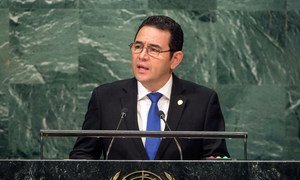 Addressing the United Nations General Assembly today, the President of Guatemala, Jimmy Morales, voiced his commitment to fight the corruption that weakens institutions.