UNICEF/Stephen Wandera
A young girl carries her sibling on her back and firewood on the head. Girls always bear the burden of doing most of the house chores.
7 October 2016

Ahead of the International Day of the Girl Child on 11 October, the United Nations Children’s Fund (UNICEF) today released a report warning that the worldwide disparity between unpaid household chores assumed by girls aged five through 14 as compared to their male counterparts, amounts to 40 per cent more time – or 160 million more hours a day.

“As a result, girls sacrifice important opportunities to learn, grow and just enjoy their childhood,” she stated.

The report includes the first global estimates on the time girls spend doing household chores such as cooking, cleaning, caring for family members and collecting water and firewood. It also notes that girls’ work is less visible and often undervalued.

A girl helps prepare her family’s evening meal, outside their makeshift home, in the Majo camp for displaced people, in Mogadishu, the capital of Somalia. Photo: UNICEF/Kate Holt

According to UNICEF, too often, adult responsibilities, such as caring for family members, including other children, are imposed on girls. Time spent on chores limits a girl’s time to play, socialize with friends, study and be a child. Additionally, in some countries, collecting firewood and water puts girls at risk of sexual violence.

“This unequal distribution of labour among children also perpetuates gender stereotypes and the double-burden on women and girls across generations,” added Ms. Malhotra.

Also detailed in the report is that girls in South Asia, the Middle East and North Africa, between the age of 10 and 14, spend nearly double the amount of time on household chores than that of boys – with those in Burkina Faso, Yemen and Somalia shouldering the most disproportionate burden. At 26 hours every week, girls in Somalia spend the greatest amount of time on household chores.

“Quantifying the challenges girls face is the first critical step towards meeting the Sustainable Development Goal on gender equality and breaking down barriers that confront the world’s 1.1 billion girls,” said UNICEF Chief of Data and Analytics Attila Hancioglu.

Achieving the SDGs that address these issues and empowering girls with the knowledge, skills and resources they need to reach their full potential not only helps them, but can also drive economic growth, promote peace and reduce poverty. 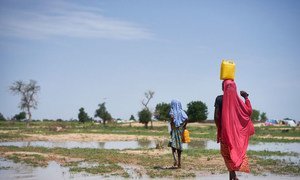