“It has taken a great deal of effort and understanding to reach this stage, and I want to applaud the spirit of consensus and compromise demonstrated by our member States, industry and civil society,” remarked Olumuyiwa Benard Aliu, the Council President of the International Civil Aviation Organization (ICAO), adding: “We now have practical agreement and consensus on this issue backed by a large number of States who will voluntarily participate in the global market-based measure – and from its outset.”

Further, the new standard is designed to complement the basket of mitigation measures the air transport community is already pursuing to reduce CO2 emissions from international aviation, including, technical and operational improvements and advances in the production and use of sustainable alternative fuels for aviation.

Earlier this year UN Secretary-General Ban Ki-moon welcomed ICAO's proposal of the first binding limits on emissions from the aviation industry, saying that carbon emissions from aviation are growing rapidly, with the number of flights worldwide expected to double in the next 15 years.

The decision by ICAO member States comes just as the landmark Paris Agreement on climate change has crossed the final threshold that will trigger its implementation within 30 days: late yesterday, the latest instruments of ratification were accepted in deposit, boosting the number of countries backing the accord to those representing more than 55 percent of world greenhouse gas emissions, as needed for implementation.

The Montreal-based ICAO works with 191 member States and industry groups to reach consensus on international standards, practices and policies for the civil aviation sector.

♦ Receive daily updates directly in your inbox - Subscribe here to a topic.
♦ Download the UN News app for your iOS or Android devices.
emissions 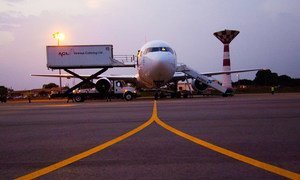