Eastern Aleppo may be ‘totally destroyed’ by end of year, warns UN envoy

<a href=http://bit.ly/2dwaCaQ>Tom Westcott/IRIN</a>
Most Syrians left in Aleppo are too poor to leave and live in the carcasses of apartment blocks.
6 October 2016

Detailing the bloodshed in eastern Aleppo, where in the last two weeks, 376 people – half of them children – have been killed, 1,266 injured, hospitals destroyed, and “all sorts of ammunitions” and weapons used, the United Nations Special Envoy for Syria underscored today that this part of the iconic city may be totally destroyed in two months, leaving thousands dead and forcing countless more to flee.

“This is what you, we, the world, will be seeing when we [are] trying to celebrate Christmas or the end of the year, if this continues at this rate, unimpeded, [it could be] Homs multiplied by 50,” stressed Staffan de Mistura at a press briefing following a humanitarian taskforce meeting on Syria, in Geneva today.

He also made a specific call on the Al-Nusra Front fighters, estimated to number about one thousand (in eastern Aleppo), as to whether they “are going to stay there [and] keep hostage [the civilians in the] city, because 1,000 of you are deciding the destiny of the 275,000 civilians.”

“If you did decide to leave, in dignity, and with your weapons, to Idlib, or anywhere you wanted to go, I personally, I am ready physically to accompany you,” he added.

He further called on the Russian and Syrian governments regarding whether they were ready to continue the level of fighting that has been ongoing, in the city where so many civilians are in imminent grave danger, “for the sake of eliminating 1,000 Al-Nusra fighters,” or if they would announce an immediate halt in bombings if the Front left.

Further at the briefing, UN Senior Adviser Jan Egeland highlighted that in addition to those in Aleppo, there are many more Syrians who are also besieged – under full military encirclement, without humanitarian supplies and without freedom go to or leave such areas. “It is illegal by international law and it is the reality of 861,000 Syrians,” said Mr. Egeland, adding: “We need to be [ruthlessly] honest with ourselves, and there is no doubt that we are failing an increasing number of civilians in Syria at this point.”

Noting that humanitarian workers were able to reach besieged areas for just five days in the month of September, he was concerned that the same thing might happen this month, and added that the UN still hasn’t received a formal answer on the humanitarian plan for October, which it had submitted well in advance, to reach all besieged and hard to reach areas where people are in urgent need.

Mr. Egeland called on all parties to the conflict to immediately cease hostilities, allow the wounded to be evacuated as well as to allow convoys, which have been on stand-by for weeks, to proceed with their urgent humanitarian mission.

On other matters, Mr. de Mistura said that the suspension of bilateral discussions between the two-chairs – the United States and Russia – on cessation of hostilities was a serious setback.

He further said that the International Syria Support Group (ISSG) is a very important entity and that the suspension of bilateral negotiations between the two countries “should not and will not” affect the existence of the Group, and emphasized the importance of the humanitarian task force, as well as the possibility of a body that would effectively and “perhaps more stringently” support future cessation of hostilities. The respective taskforces on humanitarian aid delivery and a wider ceasefire, created by the ISSG, have been meeting separately since early this year on a way forward in the crisis. Russia and the US are the co-chairs of the taskforces and ISSG, which comprises the UN, the Arab League, the European Union and 16 other countries. 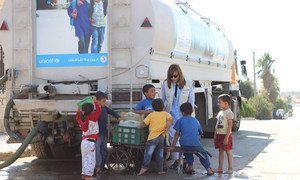 The human rights calamity unfolding in the eastern part of Syria’s Aleppo city demands bold new initiatives, including proposals to “limit the use of the veto” by the permanent members of the Security Council, the top United Nations human rights official declared today.