According to experts, countries lose hundreds of billions of dollars every year (offshore), while individuals manage to hide between $7 and $25 trillion of funds that could and should be

“We need to recall that illicit financial flows include funds that, through legal loopholes and other artificial arrangements, circumvent the spirit of the law, including, for example, tax avoidance schemes facilitated by the use of offshore corporations,” stated Mr. Bohoslavsky in a study on illicit financial flows.

The experts argue that it is time for the UN to take charge in the fight against illegal activities of offshore companies located in tax havens, because worldwide tax justice and the successful fight against money laundering will not be possible if States do not cooperate.

The first step is to establish transparency and accountability for offshore financial activity. In addition, “States must set uniform minimum taxation floors, to prevent individuals and business entities from shopping for the lowest possible tax rates,” experts stated.

According to the experts’ study, it is necessary to make public disclosure of beneficial ownership information legally binding in all countries, and set up an annual ranking process, which will be done by independent experts appointed by the UN, for the financial transparency of all banking jurisdictions.

Detecting offshore taxable income becomes easier if States and financial institutions are required to share information with foreign taxation authorities, the study notes. This would lift the veil of secrecy and anonymity that shrouds these offshore accounts and return money to the public. 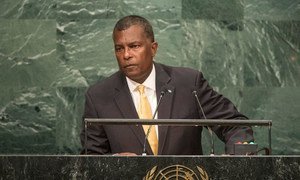 Declaring that Caribbean countries are being treated “as if they are hell on earth” due to new financial rules against tax havens, Bahamian Foreign Minister Frederick Mitchell mounted the podium of the United Nations General Assembly today to denounce the “immoral” withdrawal of normal banking services that inflict hardship on ordinary citizens.