The Security Council today formally chose the former Prime Minister of Portugal, António Guterres, as its nominee to be the next Secretary-General of the United Nations for a five-year term when incumbent Ban Ki-moon steps down on 31 December.

The recommendation, made in a resolution adopted in a private meeting by acclamation, now goes to the 193-member General Assembly for formal approval.

On an official visit to Italy, Mr. Ban said in Rome this morning that Mr. Guterres is “an excellent choice," noting that the two had worked closely during Mr. Guterres “long and outstanding tenure” as the UN High Commissioner for Refugees.

“He showed deep compassion for the millions of people who were forced to leave their homes,” Mr. Ban said, adding: “His past experience as Prime Minister of Portugal, his extensive knowledge of world affairs and his keen intelligence will serve him to lead the United Nations at a crucial period.”

Under procedures for appointing the world body’s new chief, after the recommendation is transmitted from the Council to the Assembly, a draft resolution is issued for the Assembly to take action. After appropriate consultations with Member States, the Assembly President fixes a date for the draft to be taken up.

The last five Secretaries-General were appointed by the Assembly through a resolution adopted by consensus. A vote will take place only if a Member State requests it and a simple majority of those voting would be required for the Assembly to adopt the resolution. But the Assembly could decide that the decision requires a two-thirds majority. If a vote is taken, it will be by secret ballot.

Yesterday, Ambassador Vitaly Churkin of Russia, which holds the Security Council presidency for the month, informed the President of the Assembly, Peter Thomson, that after the sixth informal “straw poll” for the position of Secretary-General, Mr. Guterres had emerged as the clear favourite.

In addition to Mr. Guterres, 12 other candidates were in the running to succeed the current UN Secretary General, Ban Ki-moon, who leaves office at the end of the year.

Guterres recommended as next UN Secretary-General

Former Prime Minister of Portugal, António Guterres, pictured here in 2014 as head of the United Nations refugee agency while briefing the press on an urgent appeal to aid African refugees, has been selected as the nominee of the UN Security Council to be the next Secretary-General of the United Nations. 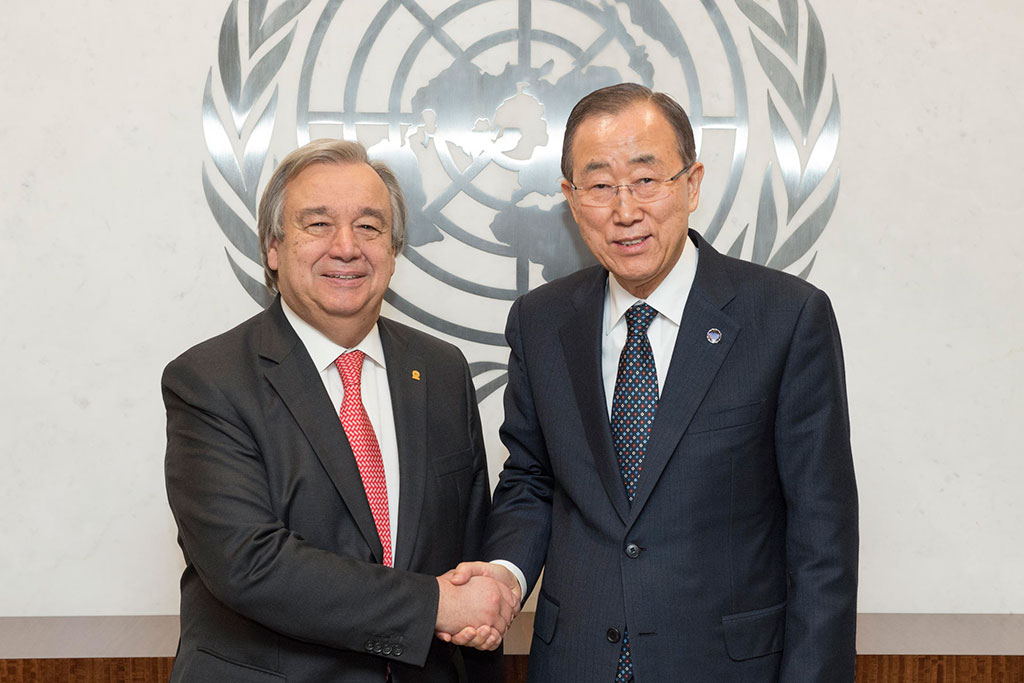 The nominee of the United Nations Security Council, Antonio Guterres, pictured here last year while serving as High Commissioner of the UN refugee agency, together with the outgoing United Nations Secretary-General Ban Ki-moon.

During the Secretary-General's press conferences in 2005, Kofi Annan, at the time chief administrative officer of the Organization, introduces the then newly appointed United Nations High Commissioner for Refugees António Guterres to the press.

“Leadership Challenges in a World in Turmoil”

Meeting with the head of the UN food relief agency

After issueing a meeting with the Executive Director Ertharin Cousin of the UN World Food Programme, the High Commissioner for Refugees Antonio Guterres briefs journalist on both agencies joint appeal for US$186 million to ensure full food rations to refugees in Africa through the end of 2014.UN Photo/ Jean-Marc Ferré

Today’s decision by the Security Council brings the UN closer towards the culmination of an historic process: the selection of a new United Nations Secretary-General, traditionally decided behind closed-doors by a few powerful countries, has for the first time in history, involved public discussions with each candidate campaigning for the world’s top diplomatic post. These so-called ‘informal briefings’ between the candidates, UN Member States and civil society representatives kicked off on 12 April, when the first three candidates presented their ‘vision statements’ and answered questions on how they would promote sustainable development, improve efforts to create peace, protect human rights, and deal with huge humanitarian catastrophes should they be selected to lead the Organization.

In addition, this past July, the UN held its first-ever globally televised and webcast townhall-style debate in the General Assembly Hall, where the confirmed candidates at the time took questions from diplomats and the public at large.