UN Photo/Rick Bajornas
Secretary-General Ban Ki-moon (left) with Pope Francis during the opening ceremony of the Vatican conference on “Sport at the Service of Humanity.”
5 October 2016

Sport and faith are based on fundamental values of respect and friendship – at their best, they are open to everyone; they are diverse and inclusive; they transcend barriers of nationality and ethnicity, United Nations Secretary-General Ban Ki-moon said in Rome today, urging the world to “summon the best from faith and sport to celebrate our common humanity.”

“[Sport and faith] are intertwined in people's lives around the world, strengthening social bonds, creating memorable occasions and inspiring people to do better for themselves, and for each other,” Mr. Ban said in remarks to a conference at the Vatican on 'Sport at the Service of Humanity.'

The conference is based on an initiative by the Holy See and the International Olympic Committee (IOC). Mr. Ban told the gathering at the opening of the event that both sport and faith can help the world achieve the Sustainable Development Goals (SDGs), which aim to eradicate poverty, end hunger and ensure a healthy, peaceful planet, “by driving social change and fostering tolerance, understanding and peace.”

In that regard, the UN chief said he would never forget a football match in Sierra Leone he attended in 2013, where both teams were made up of young people who had lost their arm or their foot. “What would otherwise have been a simple sporting event was instead a moving display of unity, determination and dignity,” he said, adding that the UN and the world highly regard the humanitarian projects of the IOC and the International Paralympic Committee, and the contributions of the athletes and sports personalities who are working as UN Goodwill Ambassadors.

“We are here today on this wonderful occasion to celebrate these two very special human activities that enhance our lives and give them meaning,” continued the Secretary-General, adding that as the world becomes ever more interconnected, national borders are losing their importance and “the bonds and communities that are built around faith and sport will be even more important in future.”

“With principled leadership and vision, together, we can achieve great things. Let us summon the best from faith and sport to celebrate our common humanity,” he concluded, thanking His Holiness, Pope Francis, with whom he had earlier held a private audience, and the Holy See for their strong commitment to sport as a force for peace and social good. 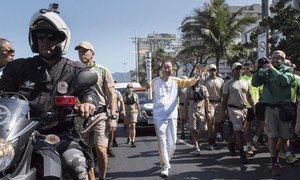 United Nations Secretary-General Ban Ki-moon participated in the Olympic Torch Relay in Rio de Janeiro this morning as the historic torch, after having made its journey from Greece, is just hours away from lighting the Olympic Flame.