Following a visit to Madagascar, the Executive Director of the United Nations’ food relief agency has announced plans to scale up humanitarian operations in response to rising levels of hunger and malnutrition as a third consecutive year of drought deepens the suffering of hundreds of thousands of people in the south of the island nation.

“The situation is extremely worrying,” said Ertharin Cousin, Executive Director of the UN’s World Food Programme (WFP), at the conclusion of her visit.

“The hunger and malnutrition we’re seeing is the result of three years of ruined harvests. We must receive the necessary funding to respond before it’s too late. This funding will also allow us to invest in people’s livelihoods, so we don’t just save lives but change lives and break the cycle of emergency response,” she added.

The preliminary results of a multi-agency food security assessment, due to be released shortly, indicate that four out of nine southern districts are likely to fall into the “emergency” classification by year’s end. Unless swift action is taken, three more districts could follow, according to WFP.

The south of Madagascar has been hard hit by this year’s El Niño weather phenomenon, which resulted in reduced rains for southern Africa. On the south of the island, one household in three has already been forced into desperate measures such as begging, selling its land or house, or migrating. Four in 10 households have already eaten their vital seed stocks, leaving nothing for the November/December planting season, WFP said.

“I met women who told me they had nothing to feed their babies except the fruit of the red cactus growing by the roadside,” said Ms. Cousin after her visit to Tsihombe district, where nearly all households are food insecure, 80 per cent of them severely so. “It’s vital in these situations that we and our partners ensure that no child goes hungry and that every child gets the nutrition he or she needs.” El Niño is the term used to describe the warming of the central to eastern tropical Pacific that occurs, on average, every three to seven years. It raises sea surface temperatures and impacts weather systems around the globe so that some places receive more rain while others receive none at all, often in a reversal of their usual weather pattern.

El Niño, and its counterpart La Niña, which is characterized by unusually cold ocean temperatures in the Equatorial Pacific, occur cyclically, in recent years, mainly due to the effects of global climate change. Extreme weather events associated with these phenomena – such as droughts and floods – have increased in frequency and severity.

According to the UN Office for Coordination of Humanitarian Affairs (OCHA), El Niño-related conditions have compounded existing vulnerabilities across southern Africa, resulting in severe food shortages. Agricultural production has been crippled, and almost half a million drought-related livestock deaths have been reported, while water sources and reservoirs are severely depleted.

With adequate funding and in support of the Madagascar Government’s own humanitarian response, WFP said that it will scale up from November to reach as many as one million people with food and cash assistance. WFP is also expanding its programme to prevent and treat acute malnutrition in more than 200,000 pregnant and nursing women, and children under five.

Starting this month, in support of the upcoming planting season, WFP said it will provide food to vulnerable communities, complementing the UN Food and Agriculture Organization (FAO), which will supply tools and drought-resistant seeds.

WFP currently provides a daily hot meal to some 230,000 primary school children – 42 per cent of primary school students in the south. For most of these children, the school meal is the only nutritious meal they receive in a day.

In addition, starting in early 2017, WFP – alongside the Government of Madagascar, the UN Children’s Fund (UNICEF), the World Bank and other partners – is planning to reach even more children with its school meals programme.

WFP requires $92 million for its humanitarian response in the south of Madagascar from now until March of next year. The agency said it currently faces a shortfall of $78.5 million. 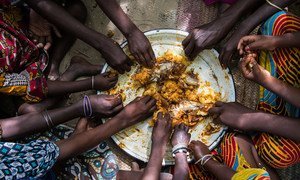 While the world has seen some progress on combatting the root causes of hunger and malnutrition, the challenge of providing the fundamental right to adequate food to all people must remain a priority, United Nations Secretary-General Ban Ki-moon said today, urging Member States to continue to work together to tackle the problem.