“The best humanitarian relief that can be provided is an end to the conflict. I urged the authorities, as I urge other parties to the conflict, to return to political negotiations without delay to reach a negotiated solution,” Stephen O’Brien, who is also the UN Under-Secretary-General for Humanitarian Affairs, said in Sana’a, the Yemeni capital.

The conflict shattered the civilian infrastructure, and destroyed livelihoods in a country which was already suffering from endemic poverty.

Violence against aid workers and civilians continues to characterize the conflict in Yemen. On 3 October, 10 civilians including six children were killed while 17 others were injured, reportedly due to shrapnel of a shell. Since March 2015, 13 health workers have died and 31 have been injured. More than 70 health centres have been damaged or destroyed by conflict.

In this situation, four out of five Yemenis are in need of humanitarian assistance. “In the 21st century, that is outrageous by any measure,” he said, expressing a concern particularly about the healthcare system as most of the facilities in 16 out of 22 governorates are either not functioning or only partially functioning. This denies thousands of Yemenis access to much needed essential health services, he added.

Mr. O’Brien travelled to the field to meet with people affected by the crisis. “My visit to Al Hudaydah hospital was heart-breaking,” he said. “Mothers bring their malnourished children for treatment but there is simply not enough medicines to treat them. The quantities of food, medicine and fuel entering the country are way below the needs and must be increased as a matter of urgency.”The Humanitarian Response Plan for 2016 is only 46 per cent funded, leaving a gap of $880 million.

“We deliver emergency food assistance to 4 million people every month, but we need to do more […] The UN and our humanitarian partners are ready to do so, but donors need to support resources mobilisation efforts,” Mr. O’Brien said.

Yemen has been engulfed in violence for several years now – a confrontation between the country’s Houthis (Ansar Allah) and the Government of Yemen in early 2014 led to a Houthi advance on the capital, and an ensuing conflict which has involved support from outside parties. The UN has been heavily involved in efforts to resolve the crisis.

While peace talks between a Yemeni Government delegation and a delegation of the General People’s Congress and Ansar Allah continued, serious violations have occurred in Marib, al Jawf, Taiz and in the border areas with Saudi Arabia. Those UN-facilitated talks ended on 6 August. 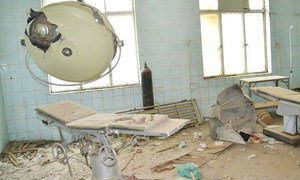 The United Nations Human Rights Office (OHCHR) is reporting that casualties continue to mount in war-torn Yemen, including after an incident yesterday evening in the central city of Taiz, where artillery fire on a busy street next to a market in Bir Basha, Al Mudhaffar district, left six children dead, six wounded and more than a dozen other casualties.