The United Nations Human Rights Office (OHCHR) is reporting that casualties continue to mount in war-torn Yemen, including after an incident yesterday evening in the central city of Taiz, where artillery fire on a busy street next to a market in Bir Basha, Al Mudhaffar district, left six children dead, six wounded and more than a dozen other casualties.

“At least 10 civilians – including six children – were killed, and 17 others were injured – including six more children and three women,” said OHCHR spokesperson Rupert Colville, at the regular bi-weekly press briefing in Geneva today.

According to Mr. Colville, the shelling appeared to have been fired from an area in Al Ta’iziyah district, where the artilleries of Popular Committees affiliated with Al Houthis and Army Units loyal to former President Saleh are positioned.

“Witnesses who spoke to our staff in Yemen said the street where the market was located was crowded with people at the time of the attack,” he said, adding that prior to the incident there had been no armed confrontations between warring parties in the Bir Basha area.

The spokesperson went on to say that OHCHR staff in Yemen verified that the overall casualty figures from March 2015 to 30 September totalled 10,963 civilians, including 4,014 people killed.

“During August and September, when casualty numbers climbed steeply after the collapse of the cessation of hostilities, six times as many civilian casualties were reported to have been caused by the Coalition – 279 killed and 339 injured – as by the Houthis and their allies – 46 killed and 62 injured,” Mr. Colville explained. “During the previous two months, the situation was the other way around, with the majority of casualties caused by the Houthis and their allies – at a ratio of just over three to one – but the total numbers were much lower.” 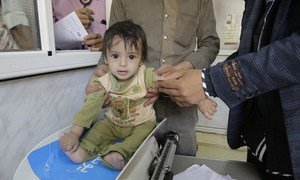 The United Nations Children’s Fund (UNICEF) has reported that, along with its partners, the agency has completed a drive reaching more than 600,000 children under five years old and some 180,000 pregnant and breastfeeding women in conflict-torn Yemen with critical health and nutrition services.