UNICEF/Khalil Alshawi
A child standing in front of his ground-flattened school after a bombardment in Ainjara village in rural Aleppo, Syria.
3 October 2016

The killing and maiming of children in eastern Aleppo by the Syrian Government and its allies is not only a brutal abdication of international human rights obligations, it will have a long-lasting impact on the young victims for generations to come, United Nations child rights experts warned today.

“Even if the war were to end today, it will take decades to recover from the destruction wrought on Aleppo and across Syria and the psychological wounds to heal from the trauma inflicted on these children,” said Benyam Dawit Mezmur, Chair of the UN Committee on the Rights of the Child (CRC).

Mr. Mezmur recalled that Syria and Russia had both ratified the Child Rights Convention along with its Optional Protocol on the involvement of children in armed conflict.

“This doesn’t solely mean not recruiting and/or using child soldiers,” he underscored. “It means not targeting children in situations of armed conflict; it means not attacking places such as schools and hospitals, which might amount to war crimes under international humanitarian law.”

Yet in eastern Aleppo, “this is what we are seeing,” he pointed out.

“Children are being killed and maimed. Airstrikes are hitting the few remaining hospitals. The use of bunker-busting bombs means children cannot even safely attend schools that are underground,” the child rights expert added.

The Geneva-based Committee recently heard detailed accounts of visiting Syrian doctors on the scale and extent of casualties among civilians as they struggled to treat the abhorrent injuries of the children.

“Children are not only being seriously injured but are trapped amid the continuing bombardment, unable to escape and receive life-saving medical care,” stressed Mr. Mezmur, adding: “The stunned, bloodied face of five-year-old Omran Daqneesh sitting in an ambulance after being pulled from the rubble horrified the world, not least because it showed that war is all this child has known in his short life.”

Mr. Mezmur noted that the Convention has been ratified by 196 States and the Optional Protocol (OPAC) by 165.

“We call on Syria and Russia, as well the international community, to show they abide by their human rights obligations set out in those treaties and find a way to end this raging conflict now. Omran must not be an adolescent or even a young adult before he knows what peace is,” concluded the chairman.

The CRC is composed of 18 independent experts who monitor the implementation of the State parties to the Child Rights Convention along with that of two Optional Protocols, on involvement of children in armed conflict and on sale of children, child prostitution and child pornography.

Independent experts and Special Rapporteurs are appointed by the Geneva-based Council to examine and report back on a specific human rights theme or a country situation. The positions are honorary and the experts are not UN staff, nor are they paid for their work. 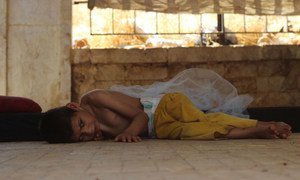 Warning of an urgent humanitarian situation in the eastern part of Syria's Aleppo city, the United Nations humanitarian chief today reiterated a call for a cessation of violence, medical evacuation of hundreds of patients in critical conditions and safe, full, regular and unimpeded humanitarian access.