In the wake of a referendum that defeated the peace accord signed by the President of Colombia and the country’s largest rebel group just days ago, United Nations Secretary-General Ban Ki-moon commended the parties for their determination, saying he believed peace could still be achieved and that all Colombians who had committed to ending the 50-year conflict should not be discouraged.

“Following the result of the plebiscite, the Secretary-General welcomes the public commitment from the Government of Colombia, the Revolutionary Armed Forces of Colombia-People's Army (FARC-EP) and all of the country’s political forces to continue working to end the armed conflict and build a lasting peace, said a statement issued today by Mr. Ban’s spokesperson.

It added: “After more than five decades of war, the Colombian people deserve no less.”

Exactly one week ago, the Secretary-General and a host of senior UN officials travelled to Cartagena to witness the signing of the peace agreement that was the culmination of a historic four-year negotiation between the Government and the FARC-EP to end the longest running conflict in the Western Hemisphere.

Those talks, hosted in Havana, Cuba, led to agreements on key issues such as political participation, land rights, illicit drugs and victims' rights and transitional justice. Among other developments, the Government and the FARC-EP announced in May an agreement to release and reintegrate child soldiers from the opposition force. The parties also announced the establishment of a gender sub-commission to bolster the voice of women in the peace process.

When the ceasefire between the parties was agreed, at their request, the Security Council established and subsequently unanimously endorsed the mandate of the UN Mission in Colombia. It is tasked with the verification of the ceasefire and the laying down of arms and has already begun its work. Yet, the accord was put to a referendum this past Sunday and rejected by the public.

According to today’s statement: “While political efforts are undertaken to assess the way forward, the Secretary-General believes all must be done to maintain calm and prevent a return to violence. He commends the parties for their commitment, as expressed by President Juan Manuel Santos and FARC-EP Commander Timoleón Jiménez, to maintain the bilateral ceasefire declared on 29 August.”

Further to the statement, the UN chief has instructed his Special Representative, Jean Arnault, to travel to Havana today to continue his consultations with the parties.

“The Secretary-General acknowledges the tremendous efforts undertaken to overcome the conflict and calls on all concerned to build on that foundation. He believes strongly that peace can still be achieved, and that the many Colombians who have committed themselves to this goal should not be discouraged,” said the statement, adding that the United Nations reiterates its firm support to peace efforts in Colombia. 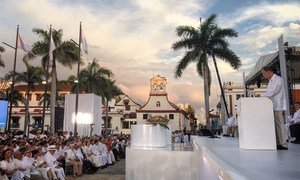