Several weeks before of the start of the new school year, the United Nations Children’s Fund (UNICEF), together with the Iraqi Ministry of Education, launched a nationwide ‘Back to School’ campaign in 10 governorates.

The campaign has reached an estimated 1.4 million children with public information messages, transport assistance, school supplies, and other services, with the aim to get more children into classrooms, and to enable those already in formal education to stay there.

In 2016, UNICEF has helped to get more than 116,000 out of school children back into classrooms, to install pre-fab school structures benefitting 42,000 displaced children, and to distribute school supplies and learning materials to more than 280,000 children.

About 64,000 Syrian refugee children living in Iraq have had their education disrupted.

UNICEF is particularly concerned for the children displaced in Anbar and along the Mosul corridor due to ongoing fighting.

Over the past few weeks, thousands have fled their homes to camps and informal settlements. As the conflict intensifies, UNICEF is preparing to support hundreds of thousands more children, along with their families.

Across Anbar Governorate, UNICEF and partners are mobilising communities with back to school campaigns; refurbishing and extending school structures; providing desks, textbooks and school bags; and helping children to catch up on lost school time, as well as to reintegrate into the education system. 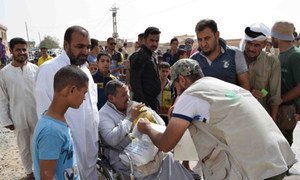 For the first time in more than two years, the United Nations food relief agency has distributed urgently-needed food for people in and around the northern Iraqi town of Shirqat, which was under siege and cut off from humanitarian access from 2014 until earlier this month.