There are now less than 30 doctors working in Aleppo city, down from 35 several days ago, a senior official of the United Nations health agency said today, highlighting the deteriorating healthcare capacity in the war-battered area.

“Up until the last few days, there had been eight hospitals partially functioning in Aleppo, but a few days ago, the two largest hospitals [were] deliberately targeted and are now not functioning, drastically reducing the capacity of health workers in the city to provide life-saving medical care for many innocent civilians,” Dr. Rick Brennan, the Director of Emergency Risk Management and Humanitarian Response of the World Health Organization (WHO), told reporters in Geneva.

“There has been a reduction in the number of health workers able to stay at their posts, and those who did are exhausted, drained physically and emotionally,” he said. “The work they are doing is beyond heroic. For them to stay at their post under those conditions deserves unending admiration and respect,” he added.

Because the supply lines are cut off, and with 270,000 people besieged in east Aleppo it is difficult to get medical supplies, equipment and fuel to the remaining health facilities, and no patients are able to get out.

Dr. Brennan said that he has been working in humanitarian assistance for 23 years, has been to conflict zones on four continents, but has rarely seen conditions as severe as those in east Aleppo today.

In Aleppo, the situation is significantly worse, he said. A few days ago, with the two main hospitals still functioning, there were 135 hospital beds available in east Aleppo. With the recent destruction of the two hospitals, the capacity to treat patients has been drastically reduced.

Children and other civilians treated in corridors

Children and other civilians are being treated on the floor in corridors, he said. There are not enough intensive care beds. Four children have died in the last few days according to medical representatives on the ground, because the intensive care unit in one of the hospitals was full, he added.

WHO is also calling for the sick and injured to be let out. There are more than 800 injured people in Aleppo, including many children, many of them with life-threatening injuries, in need of access to essential health care.

Access is needed to east Aleppo to bring in drugs, essential medical equipment and other medical personnel to relieve the brave doctors, nurses and other health care providers who have stayed at their posts throughout this recent escalation, Dr. Brennan said, expressing hope that this appeal will not fall on deaf ears, as it consistently did in the past. 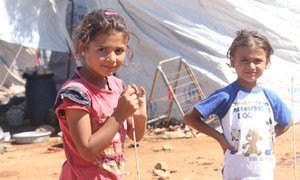 In an impassioned appeal to the Security Council, the top United Nations relief official today called on the global body’s primary organ for maintenance of peace and security to act immediately to end the bloodshed in Syria so that humanitarian assistance is able to reach those who desperately need it.