“It is deeply disturbing to learn that global levels of 400 parts per million have now been reached in September for the first time,” said Robert Glasser, the Secretary-General’s Special Representative for Disaster Risk Reduction, in a press release yesterday.

According to Mr. Glasser, the lowest levels are traditionally recorded September, which translates to the unlikelihood of seeing levels below 400 parts per million for the foreseeable future.

“We know that the safe level is well below this,” he continued. “It also means that we are systematically raising levels of disaster risk for future generations and we can expect more severe weather events in the years ahead.

Climate disasters already account for 90 per cent of all devastations caused by natural hazards – potentially catastrophic, especially for low and middle-income countries that contribute little to greenhouse gas emissions but have huge populations exposed to drought, floods and storms.

UNISDR serves as the focal point for disaster reduction coordination between the UN and regional organizations. Its work is applied to climate change adaptation; building disaster-resilient cities, schools and hospitals; and strengthening the international system for DRR. 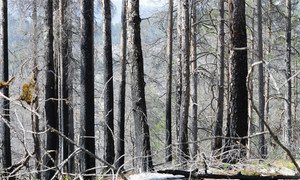