“With the region's poorest people living in rural areas, the Rural Development Report 2016 demonstrates the need for a far more comprehensive and holistic approach to economic development in order to eradicate poverty and ensure prosperity for millions of people,” said Kanayo F. Nwanze, President of the International Fund for Agricultural Development (IFAD), in a news release from the UN agency.

“The report makes it clear that investing in rural and agricultural development means investing in the whole economy,” Mr. Nwanze said.

The Rural Development Report 2016: Fostering Inclusive Rural Transformation , released by IFAD, is a rallying call to policymakers and development practitioners to win the global war against poverty, the release said.

It brings together leading thinkers to analyse the experiences of rural development in over 60 developing countries, 16 of them in Latin America and the Caribbean.

Of the countries analysed in Latin America, Bolivia is the only case in which reduction of poverty has progressed fast in spite of the fact that the transformation of its nationwide and rural economies has been slow. The Bolivian example, the report says, proves that proper, targeted policies can reduce poverty in every kind of social and economic context.

If we want to achieve the Sustainable Development Goals of eliminating extreme poverty and hunger, rural areas need to be transformed

“Although millions of people in the region have left poverty behind over the last few decades, inequality remains extremely high in the region and one quarter of the population still lives in poverty,” said Joaquín Lozano, IFAD Director for Latin American and the Caribbean. “To change this situation, we have to start in the rural areas where poverty is more pervasive.”

The report establishes that to enable Latin America and the Caribbean to overcome poverty, inclusive rural transformation needs a comprehensive approach that goes beyond just increasing agricultural productivity. It has to give rural people access to land, infrastructure, health, education, finance and contribute to establishing stronger local, regional and national institutions.

According to the report, over the past few decades great strides had been made to overcome the traditional urban-rural dichotomy. For instance, agriculture is no longer the only economic activity in rural areas where more and more families are combining farming and non-farming activities to make a living; cultural differences between rural and urban populations, especially among youth, are blurring; and the divide between urban and rural areas is also blurring as rural communities grow into medium-sized cities and more people live between rural and urban areas.

This complex reality represents opportunities as well as challenges that require policymakers and development practitioners to change their approach to rural poverty issues.

The report concludes that policies and investments need to bring poor, often marginalized, rural people into the economic mainstream so that rural development is socially, economically and environmentally sustainable. In the case of Latin America this applies especially to historically neglected segments of the population, including rural women and youth, indigenous peoples and Afro-descendant communities.

“If we want to achieve the Sustainable Development Goals of eliminating extreme poverty and hunger, rural areas need to be transformed,” said Mr. Nwanze. “But we know from this report that the process is not automatic. It is a choice governments need to make, and it is a choice that is becoming increasingly urgent. The future prosperity of people and nations depend on it.” 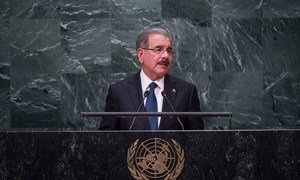 Underlining that the fight against poverty and inequality has great potential for long-term transformation, the President of the Dominican Republic today in his address to the United Nations general Assembly called for a sustained focus on those who have been recently lifted out of poverty, given that they face distinct vulnerabilities.