“It’s a very, very interesting period,” said David Nabarro, the UN Secretary-General’s Special Adviser on the 2030 Agenda for Sustainable Development, at a press briefing at UN Headquarters in New York this afternoon, during which he told reporters that India will submit its ratification on 2 October, the birthdate of Mahatma Gandhi.

“As Secretary-General Ban Ki-moon said in his speeches at various points last week, we are tantalizingly close to the Paris Agreement entering into force,” he added.

Adopted in Paris by the 195 Parties to the UN Framework Convention on Climate Change (UNFCCC) at a conference known as COP21 this past December, the Agreement calls on countries to combat climate change and to accelerate and intensify the actions and investments needed for a sustainable low-carbon future, as well as to adapt to the increasing impacts of climate change. Specifically, it seeks to limit global temperature rise to well below 2 degrees Celsius, and to strive for 1.5 degrees Celsius.

The pact – which was signed in New York on 22 April by 175 countries at the largest, single-day signing ceremony in history – will enter into force 30 days after at least 55 countries, accounting for 55 per cent of global greenhouse gas emissions, deposit their instruments of ratification.

During the UN General Assembly’s general debate this past week, 32 more countries deposited their instruments of ratification for the Agreement, bringing the total to 61 countries that have formally joined the pact, and officially crossing one of the two thresholds required to bring it into force. Those 61 countries together represent 47.79 per cent of global greenhouse gas emissions. Following the announcement regarding India, formal approval from countries representing slightly more than three per cent in global emissions is still needed.

In early September, the world’s two largest emitters, China and the United States, joined the Agreement.

At the briefing today, Mr. Nabarro expressed confidence that the Agreement will enter into force at some point this year, highlighting that at least 14 other countries, representing at least 12 per cent of global emissions, have committed to ratifying the pact.

“We think we’re going to have the speediest entry into force for any agreement that requires such a large number of ratifications. And that’s why I’ve got a smile, because it’s really good news,” he added.

The Special Adviser also praised Mr. Ban for the high-level event on the Agreement’s entry into force that was held at UN Headquarters on 21 September.

“It showed us that the momentum for climate action, linked with the momentum for action to realize the Sustainable Development Goals (SDGs), is really strong, and it’s growing. And there’s a really deepening understanding that we cannot afford to postpone action on climate change,” Mr. Nabarro said.

Also speaking today was Selwin Hart, Director of the Secretary-General’s Climate Change Support Team, who encouraged all countries to ratify the Agreement as soon as possible. “These are truly exciting times,” he said, adding that the Agreement’s entry into force would raise hope regarding climate change, especially in the most vulnerable countries.

Mr. Hart highlighted that coming from a small island developing State, the Agreement is a “really big step forward.”

“It matters for the survival of small island developing States, for African countries, for least developed countries, and also for vulnerable communities even in advanced economies,” he stressed.

He also noted that tomorrow, European environmental ministers will decide how the European Union (EU) and its members will advance their ratification of the Agreement. Expressing hope that the EU countries will agree to deposit their instruments of ratification on an accelerated timeline – and possibly during the first week of October – he said that the Agreement could enter into force in time for the 22nd session of the Conference of the Parties (COP22) to the UNFCCC, which will take place from 7 to 18 November in Marrakesh, Morocco. 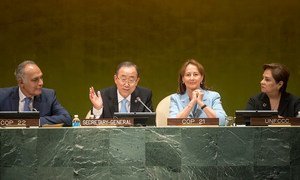 ‘There is no time to waste’ Ban says, as Paris climate accord crosses first threshold for entry into force

United Nations Secretary-General Ban Ki-moon declared today that more than 55 countries have formally joined the Paris Agreement on climate change signed by world leaders this past April, officially crossing one of the two thresholds required to bring into force the landmark pact that seeks to put the world on a path towards low-carbon growth and a more sustainable future.