The United Nations Children’s Fund (UNICEF) has revised its humanitarian appeal for Nigeria from $55 million to $115 million in order to be able to assist an additional 750,000 people who can now be reached across conflict-affected areas in the north-east of the country.

“Children’s lives are literally hanging by a thread,” said Afshan Khan, UNICEF’s Director of Emergency Programmes. “We are reaching new areas to provide critical humanitarian assistance but we need greater international support to further scale up and reach all children in dire need.”

UNICEF emphasized that as new areas open up to humanitarian assistance, the true scale of the Boko Haram-related crisis and its impact on children is being revealed.

The insurgency in north-east Nigeria has mutated into a vast regional crisis confronting Nigeria and its three Lake Chad Basin neighbours – Chad, Cameroon and Niger. Insecurity has driven more than 187,000 Nigerians across the border, but incursions by Boko Haram insurgents into the surrounding countries have generated growing numbers of internally displaced people too. There are currently more than two million internally displaced persons in Nigeria.

UNICEF stressed that an estimated 400,000 children under five will suffer from severe acute malnutrition in three states across north-east Nigeria this year. More than four million people are facing severe food shortages and 65,000 people are living in famine-like conditions, mostly in Borno, the worst affected state.

The agency said that the destruction of whole towns and villages further complicates the response in north-east Nigeria. Some 60 per cent of health clinics have been partially or completely destroyed, and 75 per cent of water and sanitation facilities require rehabilitation in Borno state.

Moreover, nearly one million children are now displaced across the north-east, a million are out of school and hundreds of thousands are psychologically affected from the horrors they have lived through, the agency said. The conflict-related lack of access to children has also lead to an outbreak of polio in Borno state, where three cases of wild polio virus were confirmed in August and September.

UNICEF’s funding appeal comes as a series of coordinated emergency polio immunization and nutrition campaigns in north-east Nigeria and neighbouring countries is under way, targeting 1.8 million children in Borno state alone. The immunization campaign is also identifying and treating children with severe malnutrition.

The agency has increased its response in the areas most affected by the Boko Haram conflict since April, supporting basic health care and nutrition for children and mothers, and helping provide safe water and sanitation, child protection services and learning opportunities.

Since the beginning of 2016, 2.6 million conflicted-affected people have been given access to UNICEF-supported preventive health-care services and nearly 75,000 children have been treated for severe acute malnutrition in north-east Nigeria.

The construction and rehabilitation of boreholes has provided nearly half a million people with improved access to safe water. Safe learning spaces, teacher training and educational supplies have helped more than 72,000 children restart their education, and some 133,000 children have been provided with psychosocial support, UNICEF said.

To date, only $28 million of the $115 million humanitarian appeal has been received, which the agency said presents a “serious obstacle” to its scale-up plan. 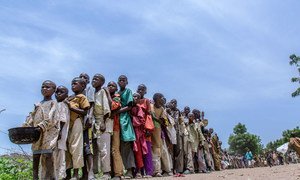 The United Nations World Health Organization (WHO) is ramping up its response in north-eastern Nigeria, where initial assessments have revealed urgent health problems among populations in areas formerly held by Boko Haram insurgents.