UN / Marina Throne-Holst
Flooding in DPR Korea, caused by Typhoon Lionrock, has displaced thousands of people and destroyed homes, buildings and other critical infrastructure in the north-east of the country.
29 September 2016

The United Nations humanitarian wing has said that more than $28 million in funding is urgently needed to provide immediate assistance to the 600,000 people in the Democratic People's Republic of Korea affected by Typhoon Lionrock.

As a result of the August floods in the country caused by the typhoon, 138 people have been confirmed dead and 400 are missing. The floods have also displaced some 69,000 people, severely affected another 150,000, and left as many as 600,000 in need of some form of humanitarian assistance, the UN Office for the Coordination of Humanitarian Affairs (OCHA) said in a press release.

“With the onset of winter just around the corner there is an urgent need for additional funding to scale up the response and provide life-saving support to the tens of thousands of people made homeless by the disaster,” said Tapan Mishra, UN Resident Coordinator.

OCHA emphasized that the displaced people are in dire need of adequate shelter. The damaged infrastructure in the flood-affected areas also includes schools, kindergartens and health clinics. Tens of thousands of hectares of arable land have been inundated, with crops destroyed, and livestock killed. Potentially impacting food security in the region, water systems have also been damaged, leaving communities dependent of sources of water that has likely been contaminated.

According to OCHA, humanitarian agencies in the Democratic People's Republic of Korea are requesting a total of $28.2 million to assist the affected people. The Emergency Response Plan focuses on life-saving activities in shelter, food and agriculture, health, nutrition, water, sanitation and hygiene, and education. 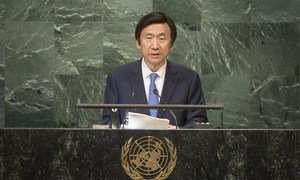 UN’s development work must heed calls of the most vulnerable, says Republic of Korea’s Foreign Minister

Noting that the 2016 is the first year for the United Nations to implement the historic 2030 Agenda for Sustainable Development and the Paris Agreement on climate change, the Minister of Foreign Affairs of the Republic of Korea underscored that the role of the global organization is more crucial than ever in an increasingly interconnected and complex world.