UNICEF/Alessio Romenzi
A girl, who fell and struck her head in her home, awaits medical examination, at Dar El Shifa Hospital in Aleppo, Syria.
28 September 2016

“Failure to act is an affront to our shared humanity. It undermines States’ legal obligations and the multilateral system as a whole,” he told the 15-member body at the start of a debate on the protection and health care facilities caught in armed conflict, noting that nearly 600 such attacks between 2014 and 2015 killed 959 people and injured more than 1,500.

“Most heinously, such attacks are often deliberate, to aggravate suffering and force people from contested territory,” he said, stressing that international law is clear that medical workers, facilities and transports must be protected and the wounded and sick, civilians and fighters alike, must be spared.

“I urge you to overcome your divisions and meet your responsibilities to prevent and reduce conflict and to build peace and stability,” he added, listing attacks just from this May including one on a hospital in Hajjah, Yemen, where 19 people died, and a suicide bombing in Pakistan on Sandeman Provincial hospital which killed over 70, both last month.

In Syria, Aleppo now faces the most sustained and intense bombardment in the more than five years of conflict with hospitals, clinics, ambulances and medical staff under attack around the clock, and 95 per cent of medical personnel who were in the city before the war reported to have fled, been detained or killed.

“Deliberate attacks on hospitals are war crimes. Denying people access to essential health care violates international humanitarian law,” Mr. Ban stressed, outlining three recommendations to the Council. First, with regard to prevention, Member States should do all they can to promote respect for medical care in armed conflict, aligning national legislation with international humanitarian law.

Secondly, on protection, Member States and parties to conflict must take precautions to safeguard medical facilities and personnel when they plan and conduct military operations, including in military orders, location of targets, issuing of advance warnings and evacuations.

Thirdly, on accountability, Member States and parties to conflict should ensure that those responsible for violations are prosecuted and punished, and provide reparations and support to those affected by such attacks.

Wide view of the Security Council during its meeting on protection of civilians in armed conflict. UN Photo/Amanda Voisard

“Failure to act is an affront to our shared humanity. It undermines States’ legal obligations and the multilateral system as a whole,” Mr. Ban declared. International Committee of the Red Cross (ICRC) President Peter Maurer told the Council that States must strengthen domestic legislation to protect access to health care and ensure attacks are punished.

“Much stronger engagement is needed to turn your commitment into a reality on the ground, to make a real difference for people suffering in wars. I urge you to continue to push,” he said, referring to a Council resolution in May calling for enhanced protection for health care workers, the sick and wounded, hospitals and clinics in war zones.

“Just a few hours ago, the two largest hospitals in Aleppo were reportedly attacked. Patients were killed. Medical staff were injured. And all across the country, many hospitals are no longer functional, leaving injured people with little hope of getting life-saving medical assistance. The violence, the disruption of electricity and water supplies and the lack of medicines have severely jeopardized access to health care,” he warned. 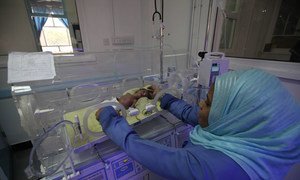 With increasing wartime assaults on and patterns of systematic destruction of health facilities in countries affected by conflict, the United Nations Security Council unanimously adopted a resolution today to strengthen protection for health care workers, the sick and wounded, hospitals and clinics, in war zones.