United Nations Secretary-General Ban Ki-moon and other senior UN officials have paid tribute to Shimon Peres, former Israeli President and the 1994 Nobel Peace Prize winner, who passed away early Wednesday at the age of 93.

United Nations Secretary-General Ban Ki-moon has paid tribute to Shimon Peres, former Israeli President and the 1994 Nobel Peace Prize winner, who passed away early Wednesday at the age of 93.

Offering condolences to his family and friends, and to the people of Israel, the Secretary-General said that “I am deeply saddened by the passing of Mr. Shimon Peres, the former President of the State of Israel.”

The UN chief noted that Mr. Peres played a central role in Israel's founding, and served his country throughout his life, not only as President but also Prime Minister, Foreign Minister, Defence Minister and in other key roles.

“He worked tirelessly for a two-state solution that would enable Israel to live securely and harmoniously with the Palestinians and the wider region, a commitment duly recognized when he shared the 1994 Nobel Peace Prize with Yitzhak Rabin and Yasser Arafat,” Mr. Ban said, also noting that Mr. Peres was also a good partner of the UN, eager to see Israel contribute to the work of the international community.

The Secretary-General said he met Mr. Peres on many occasions, and always benefitted from his views. “Even in the most difficult hours, Mr. Peres remained an optimist about the prospects for reconciliation and peace,” he added.

The Secretary-General recalled Mr. Peres' remarks at the UN: “The time has come to comprehend that the real triumph is in the harvest of peace, not in the seeds of another war. When we replace war maps with peace maps, we will discover the differences were minimal. The wars were appalling. We shall see that the promised land could have become the land of promise a long time ago.”

The Secretary-General went on to wish that “may his spirit of determination guide us as we work to ensure peace, security and dignity for Israelis, Palestinians and all the peoples of the region.”

In her tribute to Mr. Peres, the Director-General of the UN Educational, Scientific and Cultural Organization (UNESCO), Irina Bokova, said that "he was a great statesman, a great humanist, and a historic man of peace."

"Shimon Peres leaves an indelible mark on the history of the Middle East and, today, his message is more relevant than ever, to clear the path to peace and mutual respect across the region,” she said.

President of the State of Israel

In August of 2013 Simon Peres, at the time President of the State of Israel, receives Secretary-General Ban Ki-moon. UN Photo/Rick Bajornas 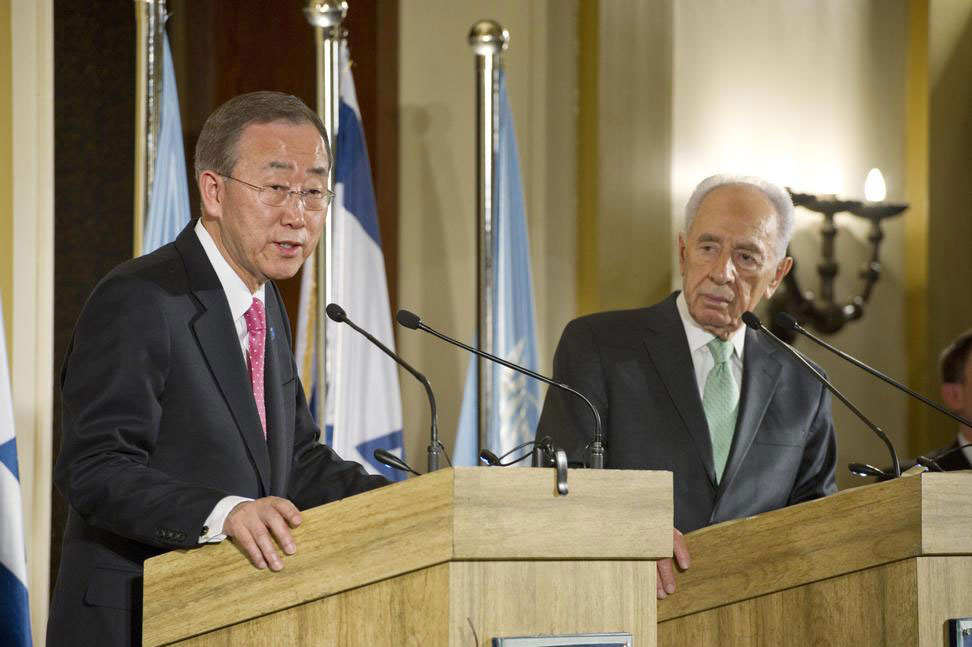 Shimon Peres of Israel, pictured here together with Secretary-General Ban Ki-moon, back in 2012, holding a joint press conference in Jerusalem after the Secretary-General fourth visit to Israel. UN Photo/Eskinder Debebe

Chairman of the Israeli Labour Party

“A founder of the State of Israel, he remained until his very last days a man of ideas and values, a man of innovation and creative thinking, always searching to mobilize new hope and energy, always seeking new ways to promote dialogue and cooperation, especially through science, for which he was passionate,” she added.

United Nations Secretary-General Ban Ki-moon today called for intensified efforts to encourage Israelis and Palestinians to take the difficult steps required to change the current destructive trajectory of the conflict, which is heading towards a “one-state reality” rather than a peaceful resolution.