“Everyone has the right to access leisure and tourism services on an equal basis,” said Secretary-General Ban Ki-moon in his message on World Tourism Day. He added, however: “Even with modern technologies, those with visual, hearing, mobility or cognitive impairments are being left behind in many tourism destinations.”

According to the message, while almost 1.2 billion people are travelling aboard each year, close to one billion persons with disability, along with young children, older persons and persons with other access requirements, still face obstacles in accessing the most basic travel needs such as clear and reliable information, efficient transportation and public services, and a physical environment that is easy to navigate.

“Tourism has become a powerful economic sector, a passport to prosperity and peace, and a transformative force improving millions of lives,” noted Mr. Ban, underlining that benefits of accessible tourism will not only provide an important market opportunity, it will help ensure that all people are able to participate in tourism and enjoy unforgettable travel experiences.

The theme for this year’s World Tourism Day is Tourism for All – Promoting Universal Accessibility.

In a separate message, Taleb Rifai, the Secretary-General of the UN World Tourism Organization (UNWTO), the specialized UN agency that works for the promotion of responsible, sustainable and universally accessible tourism, highlighted that travelling has become a major part in many lives and said that with the world’s population ageing, everyone sooner or later will benefit from universal accessibility in tourism.

“As we celebrate World Tourism Day, let us recall that all of the world’s citizens have the right to experience the incredible diversity this planet has to offer,” he said, urging all countries and destinations, as well as the tourism industry, to promote accessibility for all. In September 2015, the UNWTO’s general assembly designated Thailand as host country for the 2016 World Tourism Day. As the host, the South-east Asian country will partner with the UN agency to celebrate the occasion.

In her own message, Kobkarn Wattanavrangkul, Minister of Tourism and Sports of Thailand, said that in addition to understanding the needs of everyone, considering the environment impact of tourism is equally important.

“As the world of travel and tourism is an expanding industry and the number of travellers increases every year, we have to ensure that travelling the world has to be safe and seamless at its utmost,” she said.

In 1979, the UNWTO General Assembly decided to institute the World Tourism Day to be commemorated every year on 27 September, the anniversary of the adoption of the UNWTO Statutes, to foster awareness among the international community of the importance of tourism and its social, cultural, political and economic value. 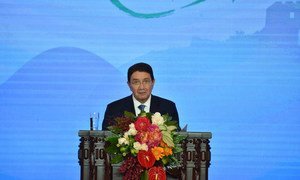 Tourism plays a crucial role in lifting people out of poverty and building peace, participants from more than 100 countries gathered at a United Nations conference in Beijing, China, this week have said, calling for greater efforts to step up international cooperation in that regard.