Four United Nations human rights experts today urged authorities in Pakistan to halt the execution of Imdad Ali, a man with a psychosocial disability, and to re-try him in compliance with international standards.

“It is a violation of death penalty safeguards to impose capital punishment on individuals with a psychosocial disability,” the UN experts said in a press release issued by the Office of the UN High Commissioner for Human Rights (OHCHR).

“We urge the authorities to annul the death sentence against Mr. Ali and to ensure a fair re-trial which takes into consideration all evidence relevant to the case including medical reports on Mr. Ali’s mental health status,” they added

The 50-year-old Pakistani was sentenced to death in 2002 for the alleged murder of a religious scholar. A year before the killing, Mr. Ali had been examined by a doctor and referred to a mental health facility for treatment. His psychosocial disability was raised at his first trial, but his condition was not mentioned in the court ruling sentencing him to death, the experts said.

While medical reports commissioned in prison in 2004 and 2012 diagnosed him with psychosis and paranoid schizophrenia, in 2015 the Supreme Court dismissed the defendant’s appeal, claiming lack of medical evidence proving his psychosocial disability, according to the experts.

They noted that an appeal had been filed against the decision, but was dismissed by the Supreme Court earlier today, and now Mr. Ali could be executed within a week.

“The courts have disregarded medical reports asserting that the defendant has a psychosocial disability and have not conducted an independent evaluation of his mental health status,” stressed the experts. “Implementing the death penalty under these conditions is unlawful and tantamount to an arbitrary execution, as well as a form of cruel, inhuman or degrading punishment.”

The UN human rights experts recalled that persons with psychosocial disabilities frequently face the risk of being sentenced to death and executed in breach of international standards.

“States must do their utmost to address this risk, including by providing accommodation during all phases of legal proceedings, and by granting adequate protection from any form of discrimination against them because of their mental health condition,” they said.

“We are concerned at Mr. Ali’s deteriorating psychosocial condition, among other things, due to lack of appropriate treatment and reasonable accommodation in detention,” the experts noted, highlighting that the denial of reasonable accommodation in detention can be considered a form of discrimination, as well as cruel, inhuman or degrading treatment.

Special Rapporteurs are appointed by the UN Human Rights Council and are independent from any government or organization and serve in their individual capacity.

UNICEF-backed conference seeks to ensure inclusion of children with disabilities 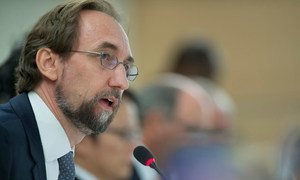