Repealing anti-abortion laws would save the lives of nearly 50,000 women a year – UN experts

“Criminalization of abortion and failure to provide adequate access to services for termination of an unwanted pregnancy are forms of discrimination based on sex,” they said in a joint statement on the eve of the Global Day of Action for Access to Safe and Legal Abortion.

“Restrictive legislation which denies access to safe abortion is one of most damaging ways of instrumentalizing women’s bodies and a grave violation of women’s human rights. The consequences for women are severe, with women sometimes paying with their lives” they said.

The experts are: Alda Facio, Chair-Rapporteur of the Working Group on discrimination against women in law and in practice; Dainius Pûras, Special Rapporteur on the right of everyone to the enjoyment of the highest attainable standard of physical and mental health; and Juan E. Méndez, Special Rapporteur on torture and other cruel, inhuman or degrading treatment or punishment.

“In the 21st century, unsafe abortion is one of the leading causes of maternal mortality and morbidity,” they said, noting that according to the UN World Health Organization (WHO), about 22 million unsafe abortions take place each year globally and some 47,000 women die from complications from the resort to unsafe practices.

Restrictive laws apply to 40 per cent of world’s population. In countries which prohibit it, women who seek health services for an abortion, whether to carry out the termination or seek medical care after a miscarriage, may be subjected to prosecution and imprisonment.

Prohibition does not reduce the need and the number of abortions, it merely increases the risks to the health and life of women and girls who resort to unsafe and illegal services, the experts said, calling evidence-based comprehensive sex education and availability of effective contraception essential to lower the incidence of unintended pregnancy, and hence abortions.

“Indeed, it has been demonstrated that countries where access to information and to modern methods of contraception is easily available and where abortion is legal, have the lowest rates of abortion,” they added.

“The possibility of accessing safe abortion remains essential. Unwanted pregnancies cannot be totally prevented since no contraceptive method is 100 per cent effective, and women may be exposed to sexual violence,” the experts said.

They recommend the practice in many countries providing women’s access to safe abortions on request in the first trimester of pregnancy.

“We insist on international legal requirements that women can access abortion at the very least in cases of risk to their life or health, including mental health, rape, incest and fatal impairment of the foetus during the first trimester and later,” they stressed. 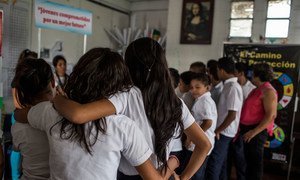