The International Criminal Court (ICC) today found a Malian Islamist accused of destroying historical and religious monuments in the fabled city of Timbuktu guilty in the first-ever prosecution of the destruction of cultural heritage as a war crime.

The judges sentenced Ahmad Al-Faqi Al-Mahdi, a member of a jihadist group linked to Al Qaeda, to nine years in prison for committing a war crime by deliberately destructing in 2012 nine mausoleums and the secret gate of the Sidi Yahia mosque in the UN Educational, Scientific and Cultural Organization (UNESCO) World Heritage site of Timbuktu in Mali, the ICC said in a press release.

“The decision of the International Criminal Court is a landmark in gaining recognition for the importance of heritage for humanity as a whole and for the communities that have preserved it over the centuries. It also supports UNESCO’s conviction that heritage has a major role to play in reconstruction and peace building,” said Irina Bokova, the Director-General of UNESCO.

This past month, Mr. Al-Mahdi pleaded guilty to the charges, which consisted in attacking 10 historic and religious monuments in Timbuktu between around 30 June 2012 and 11 July 2012. All sites but one are on the UNESCO World Heritage List.

The case comes amid growing concern about attacks by Islamists on cultural and religious monuments in the Middle East and North Africa, including, among others, in the ancient cities of Bosra and Palmyra in Syria, and in Nimrud and Nineveh in Iraq.

UNESCO highlighted today that the “historic” decision, a first under the ICC’s founding Rome Statute, is a “crucial step to end impunity for the destruction of cultural heritage.”

The door of the Sidi Yahia Mosque in Timbuktu, Mali, before and after it was attacked. Photos: UNESCO/Lazare Eloundou Assomo; Ministère de la culture du Mali/DNPC

“It confirms earlier decisions taken by international jurisdictions and it amplifies them in a judgment entirely devoted to the destruction of cultural heritage. This is a major step for the strengthening of international justice and towards peace and reconciliation in Mali,” UNESCO added. The agency also pointed out that the case “reminds us all of how heritage protection has become a major security issue, which cannot be delinked from the protection of human lives.”

“Deliberate attacks on culture have become weapons of war in a global strategy of cultural cleansing seeking to destroy people as well as the monuments bearing their identities, institutions of knowledge and free thought,” UNESCO said.

According to Ms. Bokova, immediately after the destruction in 2012, UNESCO alerted the international community and seized the ICC to ensure that such crimes do not go unpunished.

Comments to reporters by Irina Bokova, Director-General of UNESCO, on the sentencing. Credit: UN News Centre

“In the context of repeated violence against people and their heritage, this sentence of the International Criminal Court is a key element in the broader response to violent extremism,” the Director-General said.

UNESCO added that it takes the judgment as an encouragement to continue the work engaged over the past few years to protect and rehabilitate heritage in Mali, in close cooperation with the UN Multidimensional Integrated Stabilization Mission in Mali (MINUSMA), and to preserve cultural diversity and human rights as a “lasting foundation for peace, not only in Mali but also across the world.”

The Malian Government has been seeking to restore stability and rebuild following a series of setbacks since early 2012, including a military coup d'état, renewed fighting between Government forces and Tuareg rebels, and the seizure of its northern territory by radical extremists. The country has also been wracked by a series of humanitarian crises. MINUSMA was established in 2013 to support the political process and carry out a number of security-related stabilization tasks. 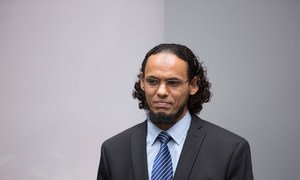 An alleged Malian Islamist accused of destroying historical and religious monuments in the fabled city of Timbuktu pleaded guilty in the first-ever international war crimes trial focusing on destruction of cultural heritage, the International Criminal Court (ICC) announced on the opening day of the landmark case, which was welcomed by United Nations Secretary-General Ban Ki-moon.