UN Photo/Cia Pak
Frederick A. Mitchell, Minister for Foreign Affairs and Immigration of the Commonwealth of the Bahamas, addresses the general debate of the General Assembly’s seventy-first session.
26 September 2016

Declaring that Caribbean countries are being treated “as if they are hell on earth” due to new financial rules against tax havens, Bahamian Foreign Minister Frederick Mitchell mounted the podium of the United Nations General Assembly today to denounce the “immoral” withdrawal of normal banking services that inflict hardship on ordinary citizens.

“This problem must be solved by those who imposed the regulations. It is a moral imperative,” he told the Assembly’s annual general debate, reprising a theme already highlighted by fellow leaders from the Caribbean Community and Common Market (CARICOM) last week.

He noted that banks in the developed world, principally the United States, are refusing to cash the cheques of some Caribbean banks because they say the risk of policing the CARICOM banks on compliance to the new rules is too high and the business they get is too low, stripping the services from across the Caribbean.

“These Caribbean territories described in their tourist brochures as paradises, are being treated as if they are hell on earth by dint of these new financial rules, using pejorative expressions like tax havens, and imposing unfair rules and sanctions on these societies, which may prevent valuable remittances to folks back home or prevent paying the school fees of Bahamian students abroad,” he said.

Stressing that no CARICOM country shields anyone involved in unlawful behaviour and that all applicable agreements are complied with in connection with money laundering and unlawful tax havens, Mr. Mitchell called the attacks on the Bahamas and CARICOM “inaccurate and unfair” and those in the press “simply reprehensible and violations of international norms.”

The developed States argue that the fact that Caribbean countries are bankers for those seeking to take advantage of tax competition is somehow immoral because it robs the developed world of legitimate revenue, but this is not true since evidence shows that wealth accumulated offshore goes back to the developed nations, he said.

“We would argue that another moral argument is that if the societies of the Caribbean collapse because of the over regulation, then the result of the destruction of millions of families would be the greater moral wrong,” he added.

Foreign Minister Wilfred Elrington of Belize endorsed other CARICOM delegations in their pleas for “urgent relief from the deleterious consequences of the decisions of global banks to withdraw banking services. “We keep upgrading our regulatory frameworks to ensure strict compliance with all relevant laws and best practices of the banking and financial sectors internationally,” he said.

He also underscored the centrality of the UN as a uniting force for championing the common good, declaring that its leadership remains central to international peace and security, development, and the rule of law.

“The 2030 Agenda for Sustainable Development is truly a historical milestone for the entire world,” he added. “In a country as small as Belize, in a world as big as ours, we are all citizens of planet earth, big or small. The policies we devise at any level must be reflective of this reality.

“It is up to us leaders, working together and shouldering our respective sovereign responsibilities, to guarantee that every nation, large and small, and every individual man

woman or child, shall have a say in our noble endeavours for a more just, equitable, and secure world.”

Denis Moses, Minister for Foreign and CARICOM Affairs of the Republic of Trinidad and Tobago, addresses the general debate of the General Assembly’s seventy-first session. UN Photo/Cia Pak

Trinidad and Tobago Foreign Minister Dennis Moses focused his address on the UN’s role in attaining the 2030 Agenda and tackling other challenges facing the world. “From the existential hazard posed by unmitigated climate change, to the insidious threat of violent extremism and terrorism; the crises of forced displacement and the spread of infectious diseases and illnesses such as Ebola, Chikungunya and Zika, it is clear that the challenges of our time far exceed the limits of geography and demography, and therefore diminishes the efficacy of unilateral responses,” he told the Assembly.

“However, as grave as the threats we collectively face, what is even more compelling is the opportunity presented to our United Nations to chart a course of meaningful and universal growth and prosperity, by deepening our partnership and cooperation,” he stated.

He called climate change “one of the defining challenges of our time […] Notwithstanding our miniscule contribution to absolute global emissions, for small island developing states such as Trinidad and Tobago, unmitigated climate change poses an existential threat,” he added.

Foreign Minister Niermala Badrising of Suriname also stressed the primacy of the UN in achieving the Sustainable Development Goals (SDGs) and combatting climate change. “As we continue our deliberations and take decisions on pertinent issues with respect to the global agenda, the world finds itself at elevated levels of crises: financially, economically, environmentally and politically,” she said, calling this the opposite of what is needed for sustainable development for all, namely peace, stability, democracy and universal access to the planet's resources.

She voiced concerned at the multitude of challenges and threats facing the world in the political, security, economic and social arena, including the global recession and economic slowdown, which have worsened inequalities, causing increased violence, political instability and social deterioration.

“The relevance of multilateralism has proven to be essential for our coordinated actions. Suriname recognizes the eminent role that the United Nations fulfils in ensuring lasting development and peace, and we pledge our unwavering commitment to the work of the United Nations,” she concluded. 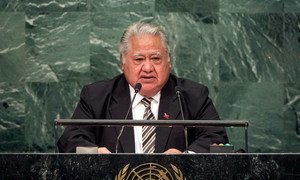 Addressing the annual debate of world leaders at the United Nations General Assembly, leaders from Pacific Small Island Developing States underlined today the urgency of strong and committed action on the global pledges made for the planet and its people.