Telling the United Nations General Assembly that over the 25 years of Eritrea’s independence it has faced a “concerted onslaught” of difficulties – incessant hostility, occupation, and sanctions – the country’s Foreign Minister today said that resilient Eritrea and Eritreans, at home and abroad, were nevertheless able to fend off the attacks on their nation and protect their hard-won freedom.

“Few gave Eritrea a fighting chance. We were routinely written off, our imminent collapse predicted with regularity,” Osman Saleh, Minister of Foreign Affairs said at the Assembly’s annual debate, adding that the country and its people, through “sheer determination,” resisted the onslaught, and, after a difficult decade-and-a-half, the country is moving up; its economy is rebounding, infrastructure is being built and, among others, favourable conditions are being created to provide quality education.

“The pressures, coercion and hostility that Eritrea has faced are by no means exceptional or distinctive,” he said, arguing that in the Horn of Africa region, they are only one element of a misguided policy pursued over a quarter of a century that has fuelled violence, conflict, instability, and fragmentation, as well as extremism and terrorism. Indeed, many nation that cherish dignity and independent decision-making “have to face the wrath of those who wish to cling to their domination and privilege.”

He went on to stress that more broadly, unsustainable policies of greed and pillage and the reckless resort to unilateral pressure and force to secure unilateral advantage, instead of seeking common ground and mutual interests, is pushing the world on an extremely dangerous path. To that end, he said the pending decision by the United States to adopt legislation that nullifies national sovereign immunity constitutes a violation of international law and a dangerous precedent with grave implications.

“In our region […] the past two decades have generally been a period of missed opportunities, of zero-sum games, of repeated conflicts and setbacks. Even today, the situation remains fraught with risk and danger,” noted Mr. Saleh, yet recent developments indicate the possibility of an opening for a new beginning, for re-launching the vision of a peaceful, progressive, economically dynamic and cooperative Horn of Africa.

To this end, he said that Eritrea is keen to build on its encouraging achievements to transform its economy and society, to achieve the Sustainable Development Goals (SDGs), mainly by relying on the energy, skills and initiative of its people and the judicious use of its natural resources. “It is also determined to work actively and constructively, and in collaboration with its neighbours, for peace, stability and prosperity in the Horn of Africa and Red Sea regions,” he concluded. 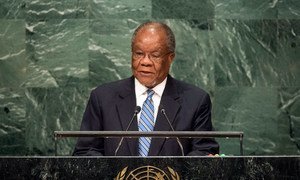 Stressing the primacy of the United Nations in forging the collective momentum needed to achieve the Sustainable Development Goals (SDGs) and tackle climate change, Prime Minister Sibusiso Barnabas Dlamini of Swaziland told the General Assembly today that global integration is crucial to transforming the world.