Caribbean leaders at UN warn of region’s ‘economic collapse’ under US, EU decision on banking

Given their size and limited choices for economic expansion, small island States like St Lucia have looked to the more advanced economies for innovative means of economic development, the tiny country’s Prime Minister told the United Nations today, among many speakers from the region who said they now find themselves being penalized as tax havens by the very architects of such strategies.

Having adopted programmes created by wealthy countries, such as ‘Citizenship by Investment’ programmes,’ and financial services and trusts, small island states have been “left to dance between the raindrops,” as, once they become branded as tax havens, their ability to grow their economies becomes compromised, Allen Michael Chastanet , St. Lucia’s Prime Minister said in his address to the Assembly’s annual general debate.

“A painful example of such exclusion is the inescapable fact that while we continue to feel the negative effects of the 2008-2009 global financial and economic crises, we are not involved in the solutions to the problems,” he said, noting that while the G20 has designated itself the forum for collective international economic cooperation, Saint Lucia, like the majority of UN Member States, is not a member of that bloc, “nor were we consulted on its appointment as the arbiters of our economic fate.”

The G20 also has a serious legitimacy problem, Mr. Chastanet continued, noting that aside from being unofficial and non-inclusive, many of the countries at the table represent the champions of the economic and financial systems and policies that led the world into the crisis in the first place. “The crisis has produced in our states, increased poverty, suffering and social and political upheaval. Its disproportionate impact on the poor has only widened the gap between developing and developed countries,” he said.

Similarly, Gaston Alphonso Browne, Prime Minister of Antigua and Barbuda, said that along with climate change and lingering indebtedness, Caribbean islands face yet another existential threat from the withdrawal by global banks of correspondent banking relations to their financial institutions. In the global campaign against money-laundering and terrorist financing, very strict penalties have been imposed on banks by regulatory bodies in North America and Europe for any infringement of the stringent regulations.

“In this environment, where even the slightest infraction could expose a bank to a fine of hundreds of millions of dollars, many have chosen to withdraw essential correspondent banking relations from financial institutions in the Caribbean, Central America and Africa,” he explained, adding: “They call this process de-risking. I call it economic destruction.”

Mr. Brown said while this trend is prevalent in a few regions, it will spread with global consequences unless checked by collective action. “We would be severed form the world’s trading system, unable to pay for basic services we purchase, or to receive payments for gods and services we sell to other countries,” he explained, stressing that this “growing cancer” would likely lead to economic collapse, poverty and high crime in small countries and worse still, would force underground the financial transactions that are being regulated by law enforcement agencies, creating huge opportunities for money laundering and terrorist financing.

“This would undermine the very global, multilateral cooperation that is required to fight these scourges,” he said, and noted that of all the terrorist financing and money laundering cases that have been prosecuted, not a single one of them involved Caribbean financial institutions.

For his part, Timothy Harris, Prime Minster of St. Kitts and Nevis said the trend has led Caribbean and other small island States to being further marginalized in the global financial system. Already, in the Caribbean, as of the first half of this year, some 16 banks across five countries have lost all or some of their correspondent banking relationships, putting the financial lifeline of these countries at great risk.

“In our tourism-dependent economies, where remittances factor greatly in national development, such actions threaten to derail progress, undermine trade, direct foreign investment and repatriation of business profits,” he explained, also echoing the region’s call on the G7, G20 and the international financial institutions to reevaluate the methodologies used to assess how and whether a country qualifies for concessional support or access to certain types of international funds. 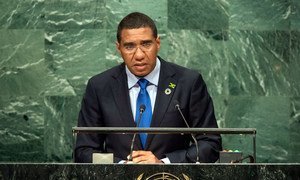 Two Caribbean island nations took to the podium at the United Nations General Assembly today to highlight their vulnerabilities, including indebtedness and poor access to financing for development.