UN Photo/Manuel Elías
A wide view of the High-level event entitled “The Death Penalty and Victims” co-organized by the Permanent Missions of Argentina, France and Italy, and the Office of the High Commissioner for Human Rights (OHCHR).
21 September 2016

Capital punishment affects an array of people, including convicted persons, the family members of both victims and perpetrators, and even people involved in criminal proceedings and executions, a senior United Nations human rights official declared today, as the world body launched a publication on the issue.

“Today is a unique opportunity to explore the impact capital punishment has on this broad array of victims,” said Ivan Šimonovic, UN Assistant Secretary-General for Human Rights at a high-level event on the death penalty and victims at UN Headquarters in New York.

The event, co-organized by the Office of the UN High Commissioner for Human Rights (OHCHR) and the Permanent Missions of Argentina, France and Italy, included a panel event on the issue as well as the launch of the publication, “Death Penalty and the Victims.”

Mr. Šimonovic noted that from the victims’ perspective, when it comes to the death penalty, “almost everyone loses.”

“Victims’ family members often end up deeply frustrated. If they are against the death penalty and the death penalty is imposed on the perpetrator, the cycle of violence is continuing instead of being broken. If they want revenge, just a few can get it, and often only after many years of waiting. Meanwhile, the expectation of the execution prevents closure,” he explained.

Meanwhile, convicted persons may be considered victims if the response of the justice system violates their human rights, through wrongful convictions, unequal and discriminatory application of justice, lack of due process, the imposition of the death penalty for crimes that do not meet the “most serious crimes” threshold, or for perpetrators who should be protected from the death penalty, such as minors and pregnant women, Mr. Šimonovic said.

“Long delays, poor conditions on death row, and botched executions may amount to torture, or at least inhuman and degrading treatment,” he stressed.

In addition, he said that third parties are often the “hidden victims” of the death penalty. When compared with other forms of punishment, the death penalty disproportionality affects the mental health and well-being of family members of the convicted person – especially children and primary caretakers – as well as persons involved in criminal proceedings or executions, such as prosecutors, judges, lawyer and executioners.

Participants at the event also heard from an innocent person who was on death row for 18 years, a prison warden, and a clinical psychologist working with families of murder victims, those sentenced to death, and lawyers defending persons on death row. 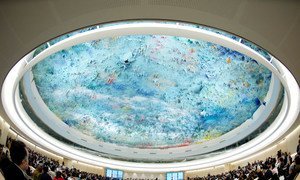 A group of United Nations human rights experts today urged the Sudanese authorities to drop charges – which carry the death penalty – brought against six human rights activists in the country.