Leaders must decide whether to ‘go it alone,’ or work together for better world, Germany tells UN

The world has become an unsafe place for far too many people, and with so many challenges to address, at times, it seems all but hopeless, Frank-Walter Steinmeier, the Minister for Foreign Affairs of Germany, told the United Nations today, “but all of us politicians here have a choice – between resignation or engagement in the face of these crises” and working towards a better future for all.

“We could also choose to put our faith in the power of diplomacy or shrug our shoulders” in the face of the conflicts in Syria, Libya, Iraq and Yemen he said, noting that Europe also faces a choice of fighting to hold the region together or allowing it to fall apart again and be overrun by populists.

“The United States is also faced with a choice; in six weeks’ time, here too, the choice is about the supposed withdrawal from a crisis-ridden world – which some are calling for – or cooperation with international partners to solve some of those problems, he continues, noting that this choice “is important for all of us.” Indeed, “withdrawal, resignation, going it alone, or, responsibility for a better future; that is the choice in many places,” he said.

Whether the world would succeed in finding better solutions to its many challenges depends on a choice as well: resolving the crisis in Syria and the migration phenomenon.

The United Nations would remain the central forum, for tackling these issues, he said. In the context of all the crisis meetings, “it gives me hope that we have made an important choice, the right choice, of the direction we want to take and that we have chosen unity and sustainability,” he said calling the 2030 Agenda a global pact that is the point of convergence for dealing with poverty and underdevelopment.

On wider issues, Mr. Steinmeier condemned the latest nuclear test carried out by the Democratic People’s Republic of Korea. In Libya and Yemen, Germany he continued would continue to support the tireless efforts of United Nations envoys in those countries. As for Syria, he said the hope raised by last week’s ceasefire has vanished yet again, following the despicable attack on a joint UN aid convoy.

It is time for a long-term humanitarian ceasefire that will allow aid to reach those in need, he said, adding that Moscow also has a responsibility in that regard. “If we do not succeed, all efforts to bring peace will be lost in a hail of bombs,” he said, noting that the Syrian regime is continuing to “bomb Aleppo to bits.” He declared: “There will be no winners in this war.”

As one of the biggest donor of humanitarian aid to Syria, Germany is particularly active in helping to stabilize areas liberated from the Islamic State of Iraq and the Levant (ISIL), he said, adding that it was working with the United Nations to rebuild schools and neighbourhoods so that people could return. Germany was also promoting education and access to labour markets in neighbouring countries that had generously opened their doors to millions of refugees.

Mr. Steinmeier went on to say that Germany had given shelter to more than one million people and has begun training them to have the skills that one day would enable them to rebuild their cities. “Returning home must not remain a mere dream,” he said, adding that it is important to improve the international architecture for dealing with migrants and refugees.

Noting that “new rifts” have emerged in Europe following “Russia’s annexation of Crimea,” he said it is important to step up dialogue between East and West, but the UN is necessary to ensure that diverging interests and opinions do not turn into lasting divisions.

Weighing the many pressing challenges of the day, Antoni Martí Petit, Prime Minister of Andorra, said the great dialectic of our times is not – as it used to be – between the right and the left, or the policy of blocks typical of the Cold War, which thankfully has been left behind.

“The great dialectic of our times is between being open and being closed: between those who wish for an open, transparent, cooperative, dynamic world with strong multilateral institutions; and those who wish for a closed, opaque, static world in which each country only and exclusively looks after its own interests,” he said.

The road to opening up to commitment, to negotiation and to multilateralism, is the path Andorra and others have been following for decades under the auspices of the United Nations. “The path to closing down is the reflection of fear and is a recipe for populism and opportunism. When faced by an economic crisis of a global scope: withdrawal and protectionism. When faced by a threat to security of global scope: closing down borders,” said Mr. Petit, expressing the hope that all delegations attending the general debate would not chose such a path, but renew their confidence in multilateralism and continue working together to solve global challenges. 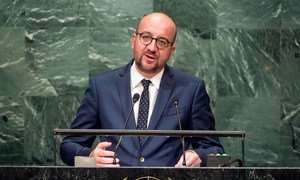 While political dialogue and multilateral negotiations might be tedious processes, they are nevertheless the surest way to secure lasting solutions to the world’s most pressing challenges, the Prime Minister of Belgium said today, joining other European leaders at the United Nations today calling for broad-based diplomatic action to end five years of chaos and bloodshed in Syria.