“Unfortunately, the ideas of mentoring, supremacy, exclusiveness, and realizing their own interests by any means, have been deeply rooted in the minds of political elites of a number of Western countries, to the detriment of efforts to promote just and equitable cooperation,” Mr. Lavrov told the Assembly’s annual debate.“The outcome of arrogant attitude and feeling of their infallibility in pushing forward unilateral hazardous solutions to the most complex conflicts and crises can be observed by the example of bleeding Middle East and North Africa. As a result, the basis of world stability is being destroyed,” he added.

He said that Syria, under the onslaught of terrorists, has been able to avoid the collapse of statehood and disintegration “mainly thanks to Russia’s military assistance,” requested by and provided to Syria’s legitimate Government.

Russia’s engagement gave an impetus to the establishment of the International Syria Support Group (ISSG) with a view to starting a meaningful political process so that the Syrians could determine the future of their country themselves through an inclusive dialogue of all ethnic and religious groups, he said.

This only course is recorded in UN Security Council resolutions and was embodied in recent agreements between Russia and the United States as Co-Chairs of the ISSG, he said.

He pointed out that the US and members of the US-led coalition have a particular responsibility to fulfil the demand by the Security Council to dissociate the so-called moderate opposition from terrorists. The Syrian crisis would not be resolved and the appalling humanitarian situation would not be rectified without suppressing the Islamic State of Iraq and the Levant (ISIL), Jabhat al-Nusra and their associate extremist groups. This is a key condition for strengthening the cessation of hostilities regime and overall national truce, he explained.

Ukraine has also fallen victim of those who enjoy “zero-point games;” its development has been undermined by the anti-Constitutional coup and now is falling apart as a result of the new authorities’ refusal to implement the Minsk Agreement of February 12, 2015, he said, stressing that the expectations to use the Ukrainian crisis for achieving corrupt geopolitical goals have no prospects.

Only honest implementation of these agreements would lead to the establishment of space of equal and indivisible security and mutually beneficial cooperation in the Euro-Atlantic area, as it was declared in the Organization for Security and Co-operation in Europe (OSCE) almost 20 years ago. Neither the North Atlantic Treaty Organization (NATO) nor the European Union (EU) will be able to substitute a truly collective unification of efforts in the common interests without winners or losers, he said.

On terrorism, Mr. Lavrov said the Russia-US agreement reached in Geneva on 9 September is to become a first real step toward creating a wide counter-terrorist front.

The tragedies in Iraq, Libya, Yemen and Syria prove the need to stop time-serving attempts to use extremists for advancing geopolitical intentions. It is necessary, “before it is too late,” to dwell on the task to prevent the proliferation of terrorist and extremist ideology, which literally holds the youth hostage in various regions of the world. In this regard, Russia is drafting a Security Council resolution “aimed at mobilizing efforts to eliminate this evil,” he said, asking for support.

In the sphere of non-proliferation and arms control, Russia is seriously concerned about attempts to replace the key objectives of maintaining strategic stability with populist “nuclear zero” slogans, he said.

Mr. Lavrov explained that the advancement toward nuclear disarmament must be made with full consideration of the whole set of factors that affect strategic stability, including the creation of unilateral missile defense systems, placement of strategic non-nuclear strike weapons, threat of placement of weapons in outer space, inability to ensure the entry into force of the Comprehensive Nuclear-Test-Ban Treaty (CTBT), and growing imbalance in conventional arms in Europe.

There is a growing support for a Russian initiative to draft an international convention for the suppression of the acts of chemical and biological terrorism, he said. The start of serious negotiations on this issue and on a Russia-China draft treaty on the prevention of placement of weapons in outer space would help move the key body of the UN multilateral disarmament mechanism – the Conference on Disarmament – out of an impasse, he said.

“We call for a substantial examination of our proposals on the improvement of the Convention on the Prohibition of Biological and Toxin Weapons,” he stressed.

On the recent actions by the Democratic People’s Republic of Korea (DPRK), he called on Pyongyang to abandon its nuclear-missile programmes and return to the Nuclear Non-Proliferation Treaty (NPT) regime. “However, it is inadmissible to use this situation as a pretext for massive militarization of North-East Asia and deployment of another position area for US global missile defense there,” he warned.

All sides must embark on the way toward diplomatic settlement of the problem through the resumption of six-Party talks, he added. 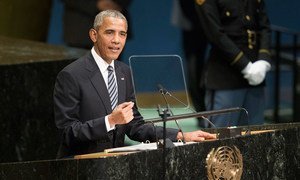 In his final address to the United Nations General Assembly as United States President, Barack Obama today delivered a ringing appeal for global integration in the face of religiousfundamentalism, the politics of ethnicity, aggressive nationalism and crude populism, even as he called for a course correction.