More support from donors is urgently needed to expand efforts seeking to improve the lives of those affected by the humanitarian crisis in the Lake Chad Basin region, the United Nations Deputy Secretary-General said today, imploring the international community to rally behind a new call for action.

“The crimes taking place in the Lake Chad Basin are tearing the social fabric in ways that could take generations to repair unless we get active now,” said UN Deputy Secretary-General Jan Eliasson at a high-level meeting at UN Headquarters in New York this morning on the humanitarian crisis in the Lake Chad Basin – which borders Cameroon, Chad, Niger and Nigeria – attended by the Presidents of those four countries, as well as other world leaders and international partners.

A new report by the UN Office for the Coordination of Humanitarian Affairs (OCHA) has revealed that long-running violence and military counter-offensives by Boko Haram insurgents have affected about 21 million people across the Lake Chad Basin and left nearly half of the region's population, or 9.2 million people, in urgent need of humanitarian aid.

According to OCHA, suicide bombings, raids on villages and towns have uprooted 2.6 million people in the region's four countries, fleeing violent attacks in their towns and villages, while 6.3 million lack sufficient nutrition. Children are particularly vulnerable, especially the 1.7 million children who have been displaced across the region, OCHA noted.

The UN humanitarian agency also said that the majority of the displaced have been sheltered by communities who themselves count among the world's most vulnerable. The combined effect of growing insecurity, fast population growth and severe vulnerability resulting from a changing climate, environmental degradation, poverty and underinvestment in social services is translating into record numbers of people in need of emergency relief. UN agencies and non-governmental organizations aim to reach 6 million with assistance in the four countries, OCHA said.

At today's meeting – which was organized by OCHA – the Deputy Secretary-General noted that the four Humanitarian Country Teams have called for $542 million for life-saving humanitarian aid for the next three months – an amount that represents more than the original projected total for the year.

“The urgent needs are great. But this is not only a humanitarian crisis. It is one where humanitarian and development actors must work together,” he emphasized, adding that while providing life-saving assistance and countering violent extremism, it is also necessary to address the underlying causes of the situation and the long-term development needs.

Mr. Eliasson highlighted that violence across the region is closer to being stemmed, thanks to the concerted efforts of the Governments of Cameroon, Chad, Niger and Nigeria, and of the Multi-National Joint Task Force. He urged the affected countries to ensure that all counter-terrorism operations are conducted with full respect for international humanitarian, human rights and refugee law.

He also welcomed the agreement of the four Governments on measures to protect civilians and strengthen humanitarian support for the millions of displaced people, urging the international community to support such efforts.

To support national governments, humanitarian and development partners must coordinate across mandates and break down silos, the Deputy Secretary-General said. That, he added, will require development institutions to strengthen basic services and build resilience in areas affected by Boko Haram violence, while humanitarian assistance is still being provided.

“We must not let Lake Chad become the 'forgotten crisis'. We must work together to place the people who so desperately need our help at the heart of our efforts. Only in this way will we deliver meaningful change and live up to our promise to leave no one behind. Let us make today the turning point,” Mr. Eliasson concluded.

♦ Receive daily updates directly in your inbox - Subscribe here to a topic.
♦ Download the UN News app for your iOS or Android devices.
Lake Chad Basin 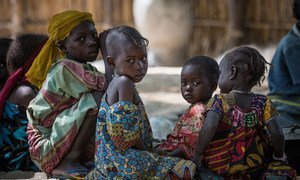 Years of violence by Boko Haram in Africa’s Lake Chad basin, which includes Nigeria, Cameroon, Chad and Niger, have led to a worsening humanitarian crisis that has displaced 1.4 million children and left at least one million still trapped in hard-to-reach areas, the United Nations Children’s Fund (UNICEF) said in a report released today.