Central African Republic has ‘turned its back on past dark days,’ President tells UN

Taking the podium today at the General Assembly, Faustin Archange Touadera, President of the Central African Republic (CAR), paid tribute to the entire United Nations system and all those in the wider international community that helped his country return to stability and constitutional legality, as he set out his four-pronged framework to continue the momentum towards lasting peace.

“The Central African Republic has turned its back on past dark days,” he told Assembly’s annual general debate, emphasizing the country’s efforts to end the cycles of violence and instability sparked by a 2013 coup, and to attain security, justice and sustainable development.

“There are vast challenges to address and much remains to be done to address the yearnings of our citizens,” Mr. Touadera said, explain that when he assumed the presidency, he took special measures to ensure that all Government institutions are well placed to undertake much-needed reforms. He also assured the Assembly that his administration was determined to tackle corruption and address impunity.

“Despite our progress, the situation is a fragile one,” he said, noting that he had taken a special interest in bringing the entire country together under a four-stage framework based on peace and security; national reconciliation; economic recovery; and justice and human rights. Measures proceeding along these lines will help the country ward off the perils of poverty and insecurity, he said, noting that he will also make a special appeal at the upcoming November Brussels conference on his country to assist with rebuilding and strengthening institutions.

The Government has also taken urgent measures to re-establish its national armed forces and with that in mind, he pleaded for the removal of all embargoes on the country, which are now unnecessary as the country has returned to democracy and rooted out violence. President Touadera went to welcome the international community’s understanding “of what is at stake,” for CAR and reiterated that despite the country’s determination to take charge of its destiny, the situation is still fragile and it “absolutely needs the support of its bilateral and regional partners.” 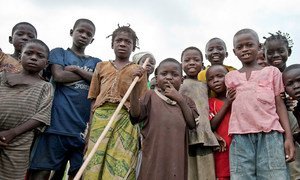 Condemning recent violence in Ndomete and Kaga Bandoro in Central African Republic (CAR), the United Nations Multidimensional Integrated Stabilization Mission in the country (MINUSCA) called on local communities to remain calm and underlined its right to take appropriate measures to prevent destabilization of the situation.