“Albania, as a European Union candidate country and in anticipation of the opening of accession negotiations, joined all the stands and commitments of the European Union, whenever it was required and it was necessary,” Mr. Nishani told the Assembly’s annual debate.

“Albania pays a special attention to the regional cooperation in its entirety,” he said, expressing support for Kosovo’s participation in all multilateral activities based on the spirit of regional cooperation and for progress on the ongoing dialogue between Kosovo and Serbia, mediated by the EU and supported by the United States and other international partners.

He noted that Kosovo, which is recognized by 109 UN member countries, has made extraordinary achievements in consolidating its democratic institutions, good governance, multi-ethnic coexistence of religions and in particular the progress in the Euro-Atlantic processes.

Mr. Nishani said Albania will continue to strongly support the expansion of international recognition of Kosovo, its active role as a full-fledge member of all regional organizations, and the inexorable process of its membership in international organizations. This would strengthen peace, security and development in the Balkan region, he explained.

This year marked the 61st anniversary of Albania’s membership in the UN, he noted, affirming the country’s continued faith in the principles of the UN Charter.

He went on to spotlight Albania’s contributions to addressing global challenges, saying that his country has piloted the design of international indicators for the implementation of the Sustainable Development Goals (SDGs), including SDG 16 on peace, justice and consolidated institutions, ratified the Paris Agreement in a short time, and joined the Global Coalition against the Islamic State of Iraq and the Levant/Da’esh early on.

Albania has adopted a special legal framework for dealing with violent extremism and terrorism by undertaking such strong measures; approval of the strategy for the fight against violent extremism on November 2015 and the establishment of the Office of the National Coordinator of Radicalization and Violent Extremism on 1 August 2016, he added.

Also today, the Prime Minister of Moldova highlighted the importance of the 2030 Agenda for Sustainable Development as well as that of the Paris Agreement on climate change.

“The unprecedented increase of regional and internal conflicts, the intensification of armed violence at global level and the restart of the arms race are only some ingredients that have fundamentally changed the international environment,” he added.

To be able to better respond to these challenges, the Moldovan leader emphasized the need for reforms at the UN, particularly at the Security Council, asking members of the 15-member body to not only react but also to prevent threats to peace and security, and called for more outreach to regional organizations that have been entrusted by the UN under Chapter VIII of its Charter to involve them into seeking potential solutions for protracted conflicts.

Further noting that no the Eastern European region is the only region which has not had representation at the UN Secretary-General, he called on all UN Member States and in particular those at the Security Council to select a Eastern European from the region while also considering the issue of gender equality in the selection process.

Recalling that in its twenty-five-year-long membership of the UN, Moldova has shared common values, responsibilities, achievements and setbacks of the global organization, the Prime Minister reiterated the country’s commitments to the UN and its strong desire to cooperate with all UN Member States to achieve the noble principles and objective embodied in the UN Charter. 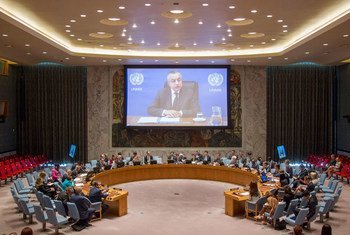 25 August 2016
Special Representative of the Secretary-General in Kosovo Zahir Tanin told the United Nations Security Council today that while opposition parties in Kosovo continue to try to generate, exploit and, if possible, prolong moments of ‘crisis,’ they appear to have become aware that the use of violence is counterproductive to their objective of gaining more political influence.