A sanitation initiative in south-eastern Haiti has shown encouraging results, with a major reduction in the number of water-borne infections for local residents, according to the United Nations Children’s Fund (UNICEF).

“Five localities in this region have been declared open defecation free (ODF), which marks progress in the prevention of cholera and other water-borne diseases in the area,” the UNICEF Representative in the country, Marc Vincent, told the UN News.

“In the area of sanitation we have come a long way and there is still a long way to go,” he added. “For UNICEF, we are active in 120 communities and, in total, more than 20,000 people in the country now benefit from living in an ODF environment – this is a substantive change and it inspires hope.”

I also educate children like me, in my neighborhood and at school: I ask them not to defecate on the ground and to wash their hands after leaving the toilet Anephta Pierre-Louis

The five localities – Nan Merlien, Fatima, Rada and three other communities in the country’s south-east – have been taking part in the UN-backed Community-Led Total Sanitation (CLTS) campaign as part of the Total Sanitation Campaign, which supports the Haitian authorities´ national plan against cholera through the promotion of zero open defecation and increased access to water and sanitation facilities in schools and health centres.

The CLTS Campaign supports local communities in addressing access to water, rehabilitating water systems and ensuring chlorination to combat contamination. At the same time, the initiative is also supporting communities to build toilets and to reduce the contamination of water through open defecation. CLTS has already been implemented in 67 other localities and, as a result, 1,000 self-built household toilets have been constructed and 2,000 more are in progress. Six communities have been certified as ODF and 16 are in process.

A community worker in the the country's South-East department, Harry Richner, underlined that the effort to convince local residents to change their habits required persistence as many had hoped that others would construct the required latrines.

“I have been engaged in this fight for a long time, and with the combined efforts of several partners we were able to end this practice in the area,” he said. “Thanks to the local CLTS committee of nine adults and two children who helped me do the work, we were able to meet the challenge.” 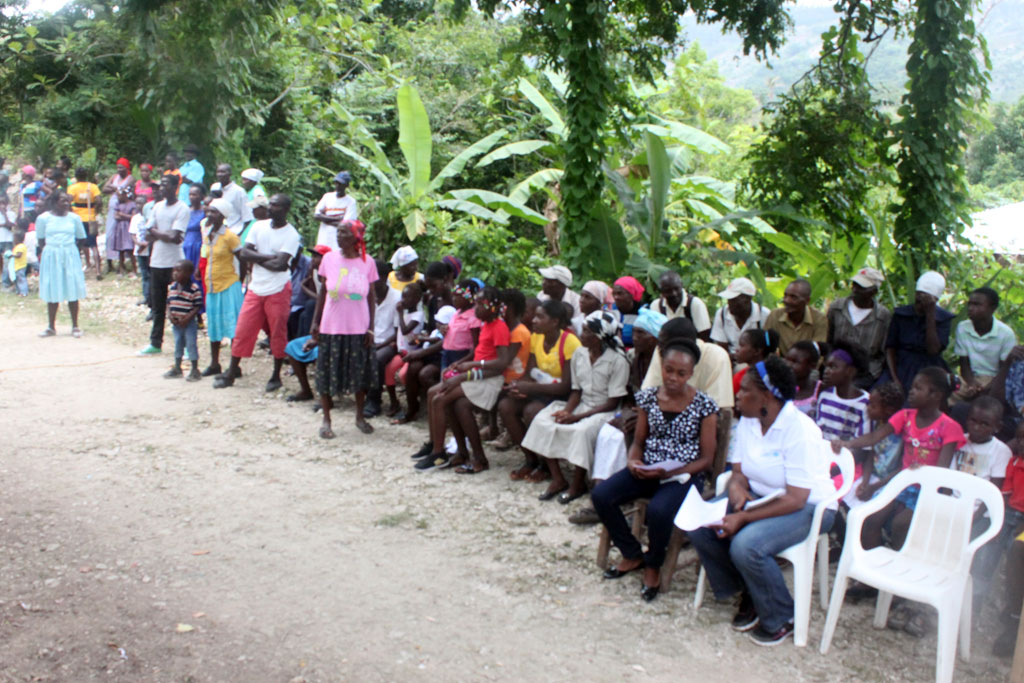 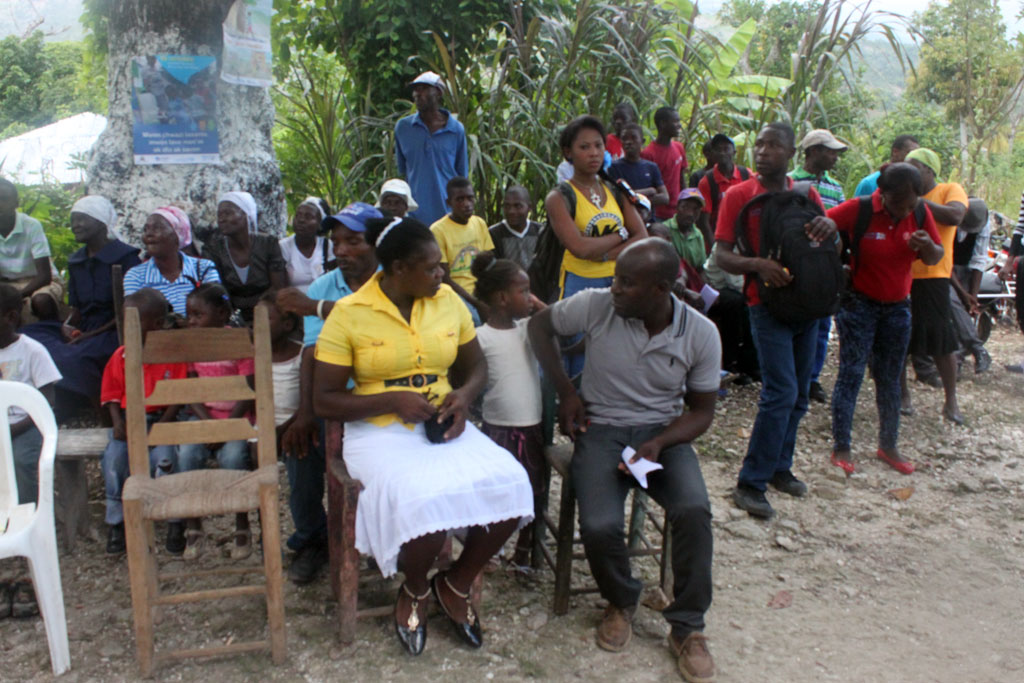 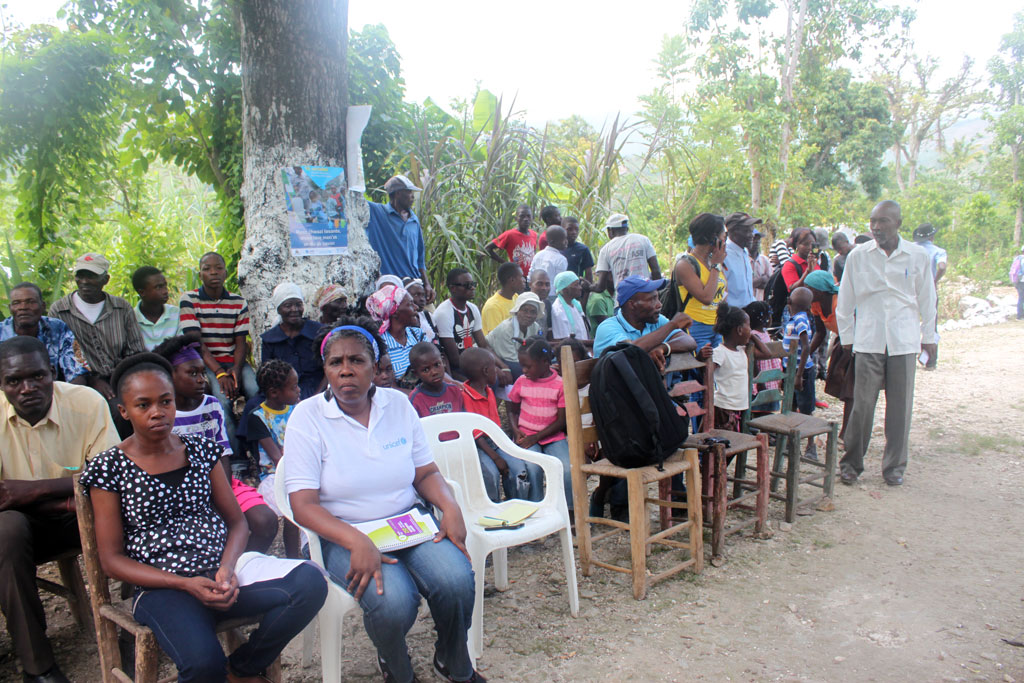 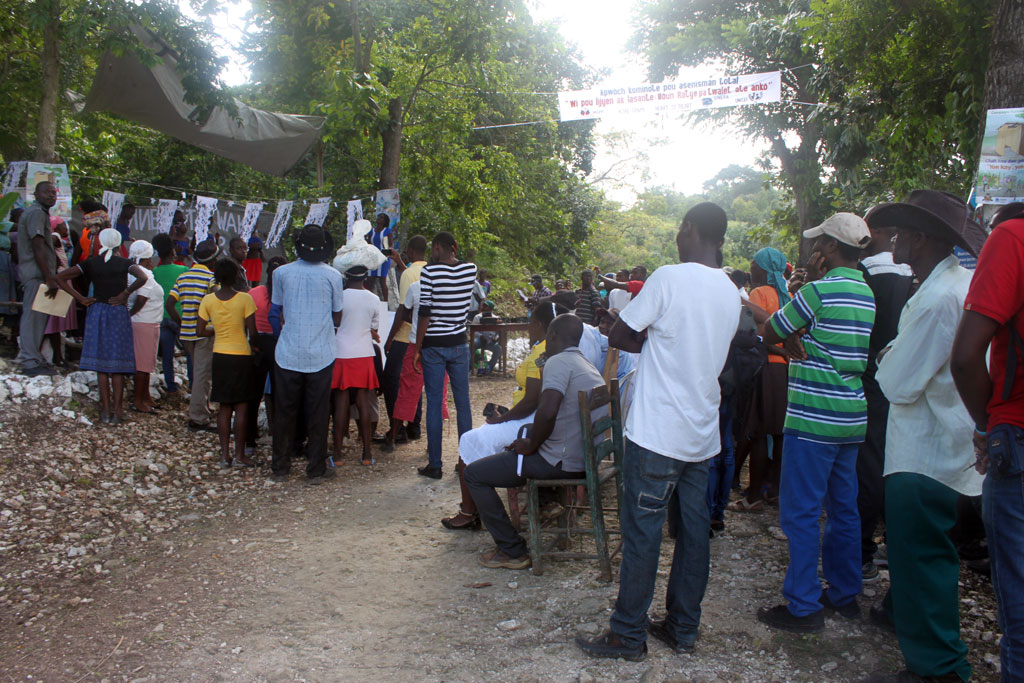 Residents in in Hati's south-east attend a community meeting on the importance of sanitation. Photos: UNICEF

One of the local committee members in the locality of Fatima Rada, 12-year-old Anephta Pierre-Louis, highlighted the important role that children have to play in the campaign.

“I deal with monitoring in the committee – when a family leaves its toilet dirty, I ask them nicely to clean it so as to avoid catching diseases, “she said. “But I also educate children like me, in my neighborhood and at school: I ask them not to defecate on the ground and to wash their hands after leaving the toilet.” 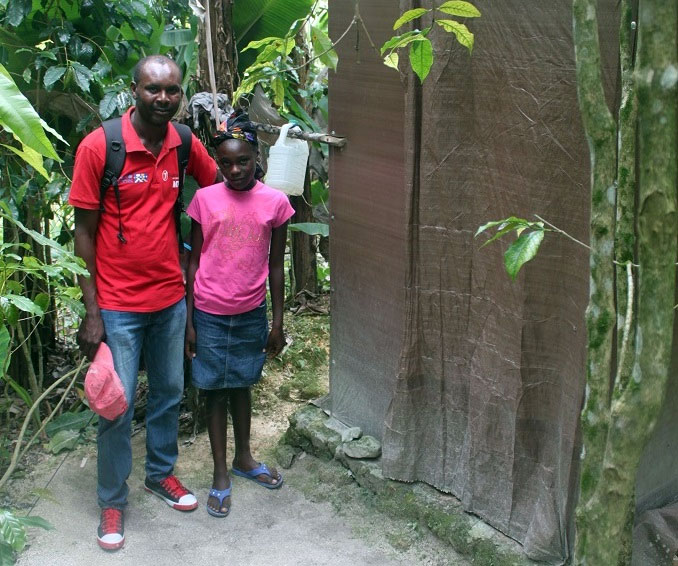 The UNICEF country representative noted that such steps provide an inspirational example for others to follow.

“When you talk to people in the communities and see how proud they are of having built themselves their own toilets, and how proud they are of protecting their families and children by their own means – when you see that it gives you hope, hope to go further and beyond,” Mr. Vincent said. “Because what we want and have to do is totally eliminate cholera.”

UN Secretary-General Ban Ki-moon launched in 2014 with the Haitian Government the Total Sanitation Campaign, which is one of the long-term key pillars to the cholera response in Haiti. This response has also other key components such as the emergency response and the epidemiological surveillance. According to UNICEF, the provision of clean drinking water, the use of safe sanitation infrastructure and good hygiene practices are crucial elements to advance the prevention of cholera and other water-borne diseases in Haiti

However, despite progress made in fighting cholera in Haiti, UNICEF states much remains to be done and the engagement of the full international community, donors and partners is urgently needed. Currently, according to the country’s national agency for water supply and sanitation - the Direction Nationale de l’Eau Potable et de l’Assainissement – only 28 per cent of the Haitian population has access to adequate sanitation and 42 per cent does not have adequate access to safe drinking water.