Calling for urgent reform at the United Nations and in particular at the Security Council, the President of Sierra Leone today stressed that national and global efforts to implement the Sustainable Development Goals (SDGs) will not alone deliver the promise of an inclusive and fairer world.

“Let me put it straight: our premier global institution lacks the democratic competencies to tackle the developmental, security and other challenges facing Africa and many other parts of the world,” stressed President Ernest Bai Koroma in his address to the General Assembly's annual general debate.

“Without the decisive contribution of [Africa], the continent that is mostly affected by Security Council decisions, no solution proffered to our challenges by the UN would be sustainable, inclusive or lasting,” he added, reiterating the position of Africa's “Committee of Ten” on the reform of the UN Security Council, as the Committee's current coordinator, that it firmly stands united behind the Ezulwini Consensus and Sirte Declaration on the issue.

Turning to the theme of the present session of the General Assembly, President Koroma reported that his country has integrated the SDGs and their respective targets into Sierra Leone's national development programme and that it has formulated a national integrated results framework, aligning the Global Goals to national monitoring and evaluation mechanism. He also outlined efforts within the country to counter climate change.

Furthermore, as the current chair of the Group of Fragile States, Mr. Koroma said Sierra Leone accorded great importance to SDG 17 and to the effective management of the country's natural resources to ensuring sustainable socio-economic development and a resilient future for all Sierra Leoneans.

He also emphasized that transitional justice is critical to consolidating peace, reducing poverty and most importantly, preventing countries from relapsing into conflict, and stressed that his Government is fully committed to good governance, post-conflict peacebuilding, as well as strengthening of democratic institutions and access to justice.

He also expressed appreciation to the international community for its support in dealing with the Elbola outbreak and noted that his country is now implementing its post-Ebola recovery programmes. Noting that the country faces enormous resource gaps, he called on international community and bilateral partners to fulfil the pledges they have made.

The President of Sierra Leone also welcomed increased transparency in the process to select the next UN Secretary-General but reiterated that many African countries are concerned at the slow pace of reforms at the Security Council and said that he urged for the reform process to move faster “so that Africa can take its rightful place in the UN Security Council.”

“The equitable geographical representation, with the attendant privileges in the membership of the Council would only make it more legitimate, representative, effective, transparent and accountable,” he added.

Mr. Koroma is among the many leaders who will address the general debate of 71st General Assembly. The Assembly's high-level segment opened this year with the adoption Monday of the New York Declaration as the outcome of the first-ever UN Summit for Refugees and Migrants. Made up of all the 193 Member States of the United Nations, the Assembly provides a forum for multilateral discussion of international issues covered by the UN Charter. 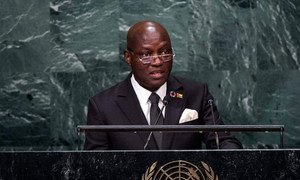 Underlining the importance of and complementarity between the 2030 Agenda for Sustainable Development and the Addis Ababa Action Agenda on financing for development, the President of Guinea-Bissau called on world leaders at the United Nations General Assembly to honour the commitments they made in the two global agreements.