“There is no alternative but to say that the threat has now reached a dimension altogether different from what has transpired until now,” Mr. Abe said during the Assembly’s annual general debate. “We must therefore respond to this in a manner entirely distinct from our responses thus far. We must concentrate our strengths and thwart North Korea’s plans,” he said.

Noting that three ballistic missiles from DPRK reached Japan’s exclusive economic zone, he said “it is purely a matter of good fortune that no commercial aircraft or ships suffered any damage during this incident.”

He said DPRK claimed to have successfully detonated a nuclear warhead in a test on 9 September, after which he phoned United States President Barack Obama and the Republic of Korea’s President, Park Geun-hye, to draw up an agreement that the three countries will demonstrate a resolute attitude toward DPRK.

“Next is the United Nations’ turn on the stage,” Mr. Abe said, calling on the Security Council to “indicate an unmistakable attitude towards this threat of a new dimension.”

Mr. Abe described peace as something like glass. When well-polished and transparent, its presence goes unnoticed. A small crack can be overlooked for a while, but “before you know it, the crack expands and the glass in time shatters with a crash,” he said.

Noting that this December, Japan will mark its 60th anniversary of its accession to the United Nations, he said his country has single-mindedly wished and advocated for world peace and the elimination of nuclear weapons.

The cumulative total of Japan's assessed contributions to the UN regular and peacekeeping budgets easily exceeds $20 billion in book value, second only to the US. In addition, its overseas development assistance has amounted to $334.5 billion, again in book value.

Peace, stability and security of the seas as well as navigation and overflight are the basis for the peace and prosperity for the international community, he said, stressing that States should make their claims based on international law, and disputes must be settled through peaceful means.

Turning to the UN governance structure, he said that countries in Africa and Latin America have built up a degree of influence in global politics and economy but they don’t have satisfactory representation on the Security Council, calling for the reform of the body as a matter of urgency. 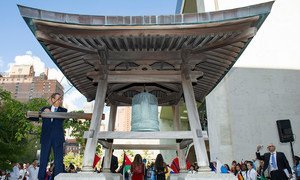 Ahead of the International Day of Peace, United Nations Secretary-General Ban Ki-moon has stressed that each of the new global Sustainable Development Goals adopted a year ago by 193 countries are the “building blocks” for peace.