UN Photo/Cia Pak
Aung San Suu Kyi, State Counsellor and Minister for Foreign Affairs of the Republic of the Union of Myanmar, addresses the general debate of the General Assembly’s seventy-first session.
21 September 2016

Mounting the podium of the General Assembly as the representative of Myanmar’s first civilian Government in over 50 years, State Counsellor Daw Aung San Suu Kyi said today that the same spirit and goals that inspired the founding of the United Nations 70 years ago inform the country’s new administration.

“The strength of this Organization lies in its universality and legitimacy, anchored in the Charter and in the fundamental principles of international law. For all its imperfections and limitations, the United Nations remains a receptacle of our hopes for a more peaceful and prosperous world, a kinder, more compassionate home for all mankind,” she told annual general debate on its second day.

She noted that Myanmar joined the UN as the newly independent Union of Burma in 1948, an “era of determined hope, when the peoples of the world rose out of the ravages of war to build anew their countries and their faith in the human capacity for achieving peace with equality, prosperity with justice.

“Now, once again, it is a time of determined hope for Myanmar,” she said, citing the overwhelming majority her National League for Democracy won in elections last November as voters demonstrated support for a political culture founded on a belief in their right to fashion the future of their country in the shape of their dreams and aspirations.

“And these dreams and aspirations echo those that had led to the founding of the United Nations,” she declared.

Daw Aung San Suu Kyi stressed that for a country that has experienced over six decades of internal armed conflict, nothing is more important than lasting peace and national reconciliation, noting her efforts to achieve this through a national peace conference.

Turning to the situation in Rakhine state, where tens of thousands of Rohingya Muslims have been living in poorly conditioned camps after a communal conflict with a Buddhist sect, an issue UN Secretary-General Ban Ki-moon raised with her during a visit last month, she said Myanmar does not fear international scrutiny.

“We are committed to a sustainable solution that will lead to peace, stability and development for all communities within the state. Our Government is taking a holistic approach that makes development central to both short and long term programmes aimed at promoting understanding and trust,” she stressed, noting that she had appointed former UN Secretary-General Kofi Annan to chair a commission to foster these efforts.

Broaching wider issues, Daw Aung San Suu Kyi said the issue of migration can only be solved by tackling its root causes, the two most important of which are lack of peace and lack of development.

On terrorism she stressed that lack of social and economic security are doubtless important factors, “but we also need to consider the possibility that lack of purpose, of a sense of direction in life, could also be a force that drives many, especially the young into the snare of ideologies that appear to offer certainty.” 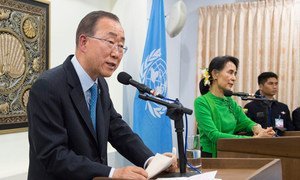