Tackling the pressing challenges currently facing all countries and regions requires a major shift in perspective, Michelle Bachelet, President of Chile, told the General Assembly today, calling for a more effective an efficient United Nations that can be the locus of “more multilateralism, more cooperation and more dialogue,” to meet the long-sought demands of the world’s people.

“Our world is in the midst of a crisis that has now been lasting for years and that, far from being resolved, has been aggravated, provoking citizens' criticism of political institutions which do not seem capable of representing the citizenry, Ms. Bachelet told delegations on the second day of the Assembly’s annual general debate.

At the same time, economic growth has led to a global slowdown and has not been able to provide the world's population with the well-being that it desires. It would appear, she said, that the far-reaching dynamics that caused the crisis some years ago were not superseded but merely “superficially retouched.”

“But citizens today are more aware and empowered. Thanks to new technology, they have new means of expression. They are showing us that in their daily lives, at their places of work, at their children's schools, in the health of their families, in the security of their cities and in relations between men and women, the negative effects of inequitable development are still being felt,” she continued.

“This is the main basis for the citizen discontent that we have seen in various parts of the world,” she noted, but emphasized that at the same time, the world is facing an unprecedented environmental crisis that threatens life on earth, with sanitary, clinical, economic, climatic and environmental effects and that mostly impacts the most vulnerable.

This is combined with violence and armed conflict in many parts of the world, which increase precariousness and exponentially expand forced displacement and major migratory movements. “The citizens' malaise is the expression of disillusionment. They are disillusioned about the promised development which they desire and for which they have fought valiantly but which is still beyond their reach.

“We are witnessing a growing schism between the representatives and the represented. There is a lack of trust in national governments and also in multilateral forums. They appear not to be tackling the priorities of the common citizen in a timely or in-depth manner,” stressed Ms. Bachelet, adding: “Now is not the time for taking the easy but ultimately destructive route of populism. Now is the time for action inspired by ethically motivated and civically-oriented pragmatism.”

As such, she said that the Sustainable Development Goals demonstrate that the international community knows that it must embark on far-reaching changes and implement them with concrete measures. “Now we must summon up the political will, in the multilateral forums and in each of our countries. Because there is inertia to be overcome and there are interests to be dealt with,” she declared.

Turning to the situation in her region, Ms. Bachelet said Chile is a medium-sized county and is not yet fully developed. However, its rapid modernization in recent decades has placed the country squarely at the frontier of the challenges of modernity, with the tensions inherent in democracy and economic growth.

At the regional and international levels, Chile, she continued, has advocated convergence in diversity in Latin America, seeking a common agenda “that, despite our differences, gives us strength as a bloc and as a region.” As for progress in that regard, she noted work on integration with Mexico, Colombia and Peru in the Pacific Alliance, which already has 49 Observer States and which is growing stronger decisively and pragmatically.

As for the work of the United Nations, the President noted that in the most dissimilar corners of the world, the people, their leaders, civil society and the media are expecting UN Member States to provide cooperative, creative and concrete responses to the problems of the 21st century.

“And so I again raise my voice in favour of Security Council reform to reflect the new realities. I raise my voice in favour of efficient management of the United Nations, more openness in its proceedings, including the election of our new male or female Secretary- General. And I ask that he or she should be committed to principles and focused on serving the people, who were the creators of the Organization,” stressed Ms. Bachelet.

The United Nations must play its role as a place of consensus and an option for the most vulnerable, opposed to inequality and discrimination against religious, ethnic or gender minorities. “Let us make the United Nations what our peoples need and demand,” she said. 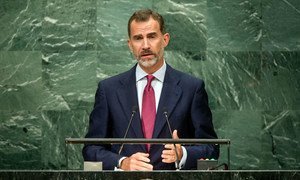 In his address to the UN General Assembly, Don Felipe VI, the King of Spain, stressed his country’s respect for the UN Charter as well as its support of implementing the key aims of the Organization, including the achievement of the 2030 Agenda and the tackling climate change, which is a “global priority” and the key to leaving a better world for future generations.