Addressing the United Nations General Assembly today, Juan Carlos Varela Rodriguez, President of Panama, emphasized that Panama is a country of dialogue and consultation – a multi-ethnic, multi-cultural and peace-loving nation, in which people from around the world who have made the country their new homeland coexist and collaborate peacefully.

He noted that the country’s motto, “Panama, Bridge of the World, Heart of the Universe,” is growing stronger, as the country moves forward with a Government committed to democratic systems.

Mr. Varela highlighted that on 26 June, the Panama Canal expansion project was successfully completed, with more than 120 Neo-Panamax ships capable of transporting three times as much cargo.

“This expansion, which was completed mainly by Panamanians, has filled our nation with great pride and joy,” he said, adding that the project fulfils the country’s commitment to facilitating global trade.

Turning to public health, Mr. Varela highlighted that Panama successfully concluded the first phase of a national dialogue on the effective coordination of the country’s health system. He emphasized that Panama has invested more than any other Latin America country in basic health and massive transport, representing about 60 per cent of its budget for 2019. In addition, Panama is diversifying its energy matrix with cleaner and more renewable energy.

Mr. Varela also noted that Panama supports the dialogue taking place in Venezuela, and he congratulated the Government of Colombia for its determination to seek peace.

Acknowledging the support of the UN for its role in the peace process in Colombia, Mr. Varela noted that the region is still threatened by an increase in drug trafficking and production. In that regard, he emphasized that Panama will continue strengthening its capacity to protect its national territory, as well as continue supporting its neighbouring countries in the fight against drug trafficking.

Highlighting the pressing importance of irregular migration flows, he noted yesterday’s UN Summit for Refugees and Migrants, saying that all migration policies and measures to be adopted will have to be based on the protection of the principle human right, which is the right to life.Panama reaffirmed its commitment to providing humanitarian treatment to migrants, and appealed to all countries in the hemisphere to do the same. In Panama’s region that particularly applied to Haitian migrants, and he also expressed hope that improved relations between Cuba and the United States would lead to solutions to migrant flows, as well as to other areas.

In his address, Luis Guillermo Solis Rivera, President of Costa Rica, reiterated the urgent need to assist, protect and respect all human rights of those forced to leave their homes in search of safety for themselves and their families as a result of armed conflicts or violence, natural disasters or the effects of climate change, which threaten their survival.

“We are not fulfilling our commitment to leave no one behind. Mass media and the international community have paid little attention to the tragedy of thousands of migrants travelling across Latin America from south to north,” he said, noting that from April to September of this year, 9,487 irregular migrants crossed his country’s borders, “and we have granted refugee status to a total of 215 people during the first semester of 2016.”

Indeed, thousands of migrants from Cuba, Haiti, Central America, Asia and Africa travelled to the region. “It is evident that we are facing a global challenge, which as such requires global solutions, solidarity, shared responsibility, and comprehensive approaches,” he said.

At the same time, he stressed that when discussing refugee and migration crises, the international community must not only consider large population movements, as these do not take into account other forms of migration that continuously happen around the world. “These take place illegally and are fuelled by inequality, poverty, and other structural causes of conflict, fostered by international organized crime networks,” he noted.

“Costa Rica, as a transit, origin and destination for human trafficking, has typified migrant smuggling as a crime in its domestic legislation against Human Smuggling and Illicit Trafficking of Migrants since 2012,” President Solis said, explaining that this legal framework also guides the design and implementation of national policies to address the migrant smuggling from the gender perspective.

Such policy includes the following perspectives: care and protection of victims, prevention, administration of justice, information gathering, analysis, and research as well as institutional coordination. “In our experience facing migration flows and the need for humanitarian aid, we must acknowledge the role played by civil society organizations as support networks for migrants and their families, in addition to their enormous capacity to document the situation in situ and deal with violations of human rights of smuggled migrants.” 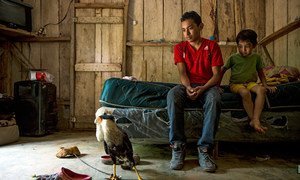