UNDP
Michelle Yeoh and UNDP announced the names of the panda ambassadors at the 7th Social Good Summit in New York.
21 September 2016
SDGs

What do two panda cubs and two Fijian girls have to do with the Sustainable Development Goals?

If you answered “everything,” then you are on the right track, according to conclusions made by top United Nations officials.

The Sustainable Development Goals (SDGs), or Global Goals, form part of the 2030 Agenda for Sustainable Development, which was agreed and adopted by world leaders last year, and serve as a global plan for people, peace, prosperity and the planet. Of the 17 SDGs, Goal 13 is centred on taking urgent action to combat climate change and its impacts, whereas Goal 15 focusses on protecting, restoring and promoting sustainable use of terrestrial ecosystems, sustainably manage forests, combating desertification, and halting biodiversity loss.

In January this year, the UN Development Programme (UNDP) designated two pandas to officially become the first-ever Animal Ambassadors for the SDGs, flagging that the bears symbolize the plight of the world’s diminishing wildlife in the face of climate change and the loss of natural habitats. The pair, both males, had been born last year at the Chengdu Panda Base in China, just as world leaders gathered in New York to adopt the SDGs.

After a global competition which saw thousands of submissions with proposed names from 116 countries, UNDP’s goodwill Ambassador Michelle Yeoh announced on Monday that the search for names had come to an end. 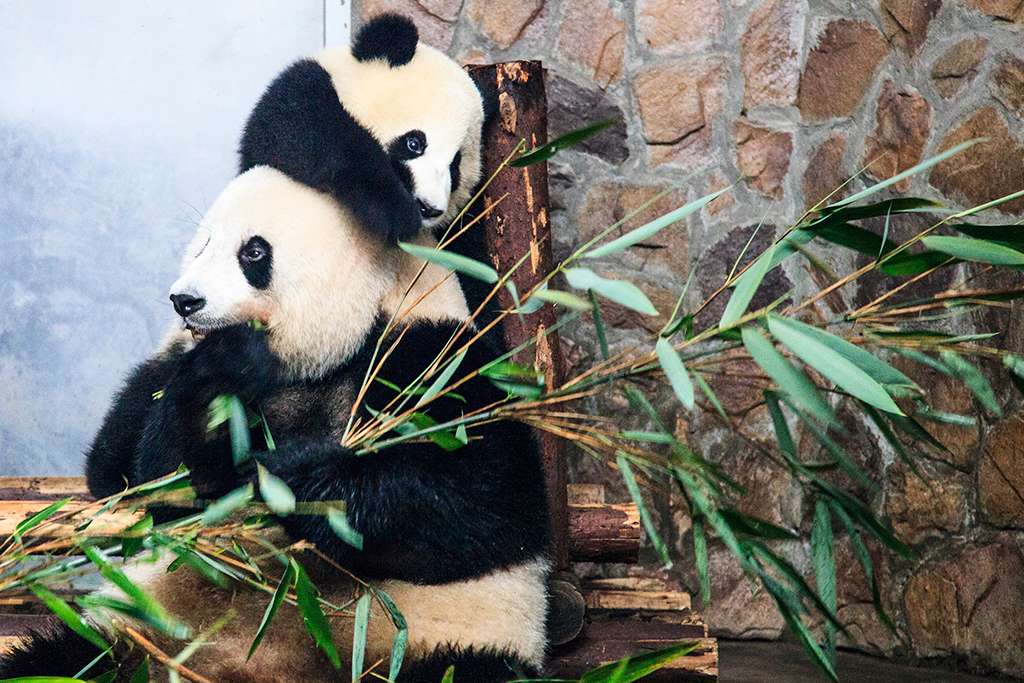 “I’m pleased and proud to announce the names of our panda ambassadors are Qiqi – in English ‘beginning,’ and Diandian, which means ‘moment,’” she said at an event at the 7th Social Good Summit in New York. “Together, the names give the sense of the start of a journey – in this case, our journey together towards 2030 as we work towards achieving the Global Goals.”

“Addressing biodiversity loss is one of the Sustainable Development Goals,” Ms. Yeoh added. “At UNDP, we hope that our twin panda Ambassadors will help inspire people to engage with the goals, and raise awareness of our efforts to promote sustainable development around the world.”

Some days before this, two other little individuals - in this case, two little girls, aged 5 and 7 -  stole the show at the opening of the 71st session of the General Assembly. The session’s President Peter Thomson, a Fijian diplomat, had invited his granddaughters Grace and Mirabel to the podium – and promised that he would work to create a better future for them, representing all future generations. 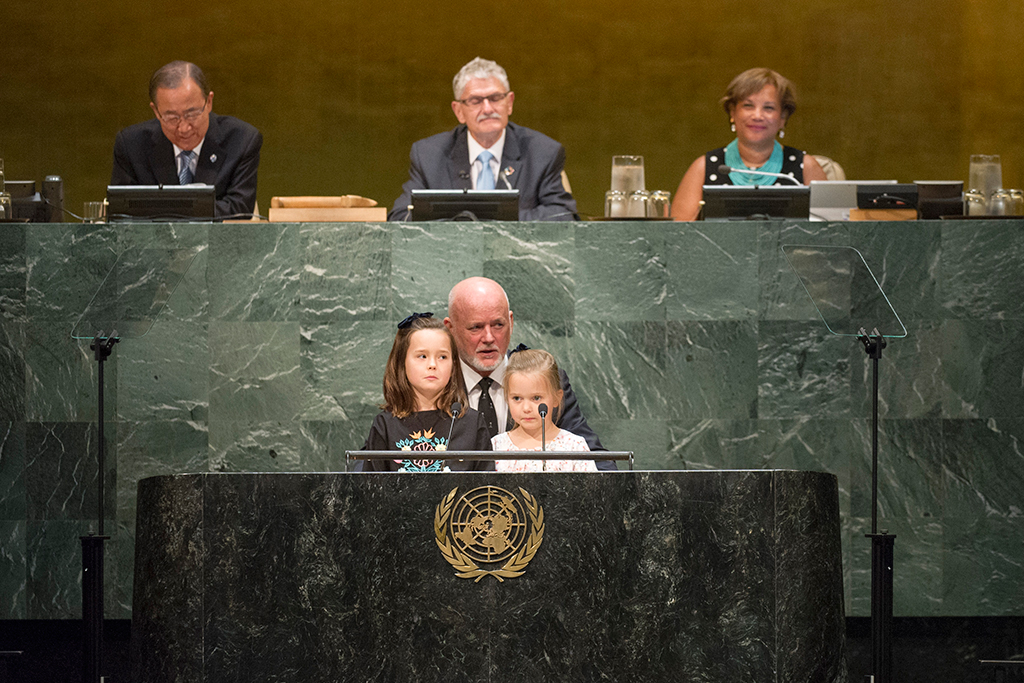 Peter Thomson (foreground centre), President-elect of the seventy-first session of the UN General Assembly, flanked by his granddaughters Grace (left) and Mirabel, addresses the Assembly before taking the oath of office. UN Photo/Rick Bajornas

“What kind of world will we have bequeathed them and all their brothers and sisters around the world, your own grandchildren and children, born and yet to be born?” Mr. Thomson asked.

“Will it be a world,” he added, “where the projected loss of biodiversity on land and sea severely limits the possibilities of life, where atmospheric levels of CO2 have gone well beyond the 1.5 to 2 degree thresholds, thereby imperilling humanity’s place on this planet?”

In his remarks at the opening, the Assembly President also said that “for integrity’s sake the 71st [GA session] must be the year we witness the wheels turning on the implementation of all 17 SDGs.”

Climate change to the fore

The issue of climate change will come to the fore this week, during the 71st General Assembly’s General Debate, taking place at UN Headquarters in New York from 20 to 26 September. The event is the annual meeting of Heads of State and Government at the beginning of the General Assembly session. 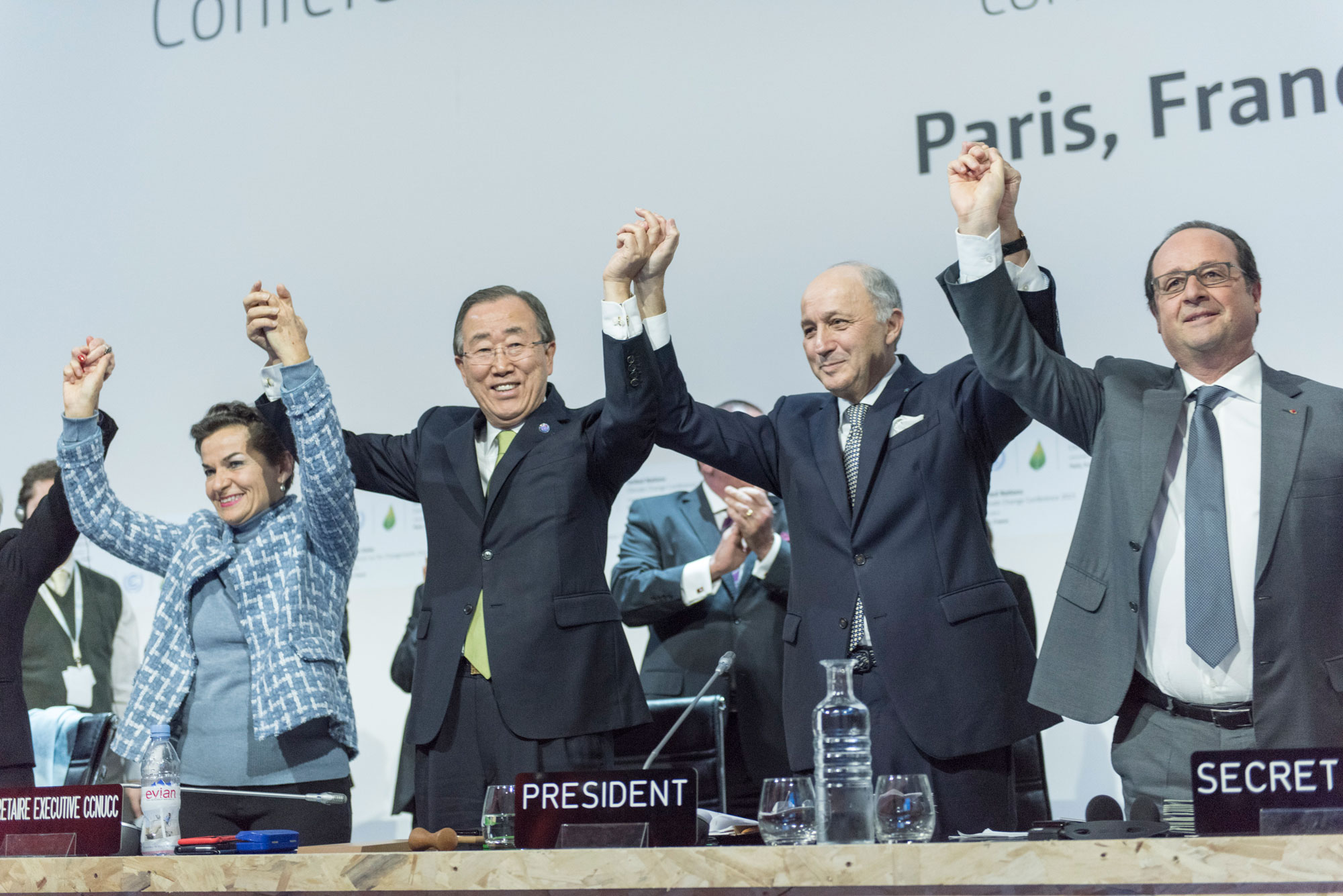 Leaders from all countries have been encouraged to deposit – at a special event on 21 September – their instruments of ratification, acceptance, approval or accession to the Paris Climate Change Agreement, which was adopted by 195 countries during the conference in Paris last December. The agreement sets out an integrated vision for the future and sets in motion the pathways to an economic and social transformation to achieve it.

The more countries that deposit their instruments at Wednesday’s event in the General Assembly, the stronger the chances of the Paris Agreement coming into force early. The event is also seen as providing an opportunity for nations to publicly commit to joining or ratifying the agreement before the end of 2016.

“The Paris Agreement marks a historic turning point in our common journey towards a secure and sustainable world,” Secretary-General Ban Ki-moon has said on the pact, adding that with 28 additional countries, representing 16 per cent of global greenhouse gas emissions, the agreement would cross the necessary threshold to enter into force.