In his address to the General Assembly’s annual general debate, Josaia Voreqe Bainimarama, the Prime Minister of Fiji, underscored that “first and foremost, we have placed sustainable development at the core of our national agenda.”

“The world must act quickly and decisively to reverse the environmental degradation of our oceans and seas and the reckless and irresponsible use of their precious resources,” emphasized Mr. Bainimarama as he took the podium.

Calling it “a centrepiece of the 71st session and one of our most critical priorities” the Prime Minister said that Fiji would be co-hosting with Sweden, the 2017 UN Conference to Support the Implementation of Sustainable Development, which would focus on the implementation of the Sustainable Development Goal 14 – the conservation and sustainable use of oceans, seas and marine resources.

“For a small island developing State [SIDS] such as Fiji, this is as pressing as the need to address the challenges of climate change,” he stated, “and deal with the extreme weather events and rising seas that pose such a threat to our way of life in the SIDS and other vulnerable parts of the world.”

He pointed out that many millions of people in maritime and coastal communities the world over are looking to Fiji for decisive action on the growing crisis of pollution, overfishing and the loss of marine habitats, saying we “must not fail them.”

Mr. Bainimarama said that Fiji came to the UN “with a plea to all nations that have yet to do so to ratify the Paris Agreement on Climate Change.” He noted proudly that Fiji was the first nation in the world to ratify the Agreement and lodge the ratification instruments.

“But,” he continued “we also come with the message that Paris must be merely the first step. We are alarmed by scientific predictions that the 2 degree Celsius cap on global warming over pre-industrial levels agreed to in Paris is not enough to save us.”

Seven months ago, Fiji was struck by the biggest tropical cyclone ever to make landfall in the southern hemisphere. The Prime Minister called it a terrifying glimpse into the future predicted by experts.

“Cyclone Winston – packing winds of more than 300 kilometres an hour – killed 44 of our people and left many thousands homeless,” he spelled out. “Mercifully, it spared our main tourism areas – our principal source of income – so our wider economy remained intact. But if this is what awaits us as global warming triggers weather events that are more frequent and more extreme, then God help us,” he added.

In common with other small island developing States, Fiji is facing a nightmare scenario in which “a single event scoring a direct hit could wipe out our economy and set us back for decades.” This would make it impossible for the nation to meet the SDGs.

In his address, the Prime Minister stressed the message that the 2-degree cap is not enough.

“We need the world to go one better and embrace the 1.5 degree cap that we are calling for in the Suva Declaration by members of the Pacific Islands Development Forum,” he stressed, adding the need for deeper cuts in carbon emissions and more decisive global action than was currently being witnessed.

“But as a first step,” he continued “I appeal to you all to ratify the Paris Agreement. And to turn your backs on what I have termed ‘the coalition of the selfish’ – those countries that would see the vulnerable nations battered and submerged rather than alter their pampered, carbon-driven lifestyles.” 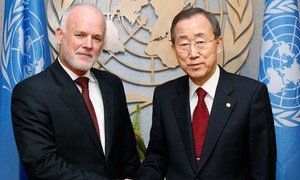