Following the tradition of being the first Head of State to address the annual United Nations General Assembly’s annual general debate, the President of Brazil today pledged that his country will formally join the Paris Agreement on climate change by depositing its instrument of ratification at a special event tomorrow with the UN Secretary-General.

Following the tradition of being the first Head of State to address the annual United Nations General Assembly’s annual general debate, the President of Brazil today pledged that his country will formally join the Paris Agreement on climate change by depositing its instrument of ratification at a special event tomorrow with the UN Secretary-General.

“As the world's most biodiverse country and displaying one of the world’s cleanest energy matrices, Brazil is an environment powerhouse with an uncompromising commitment to the environment,” Michel Temer told the Assembly in an address that also covered a wide range of issues, including protracted conflicts, multilateralism, nuclear proliferation, the refugee crisis, development, and democracy.

“Prosperity and well-being today should not impair the future of mankind. Economic growth should be socially balanced and environmentally friendly,” he said. “We live in the same Planet. There is no plan B. We must take ambitious measures under the principle of common but differentiated responsibilities.”

On terrorism and war, Mr. Temer pointed out that those who sow conflict have reinvented themselves, but multilateral institutions have yet to do so, while underscoring the need for the reform of the UN Security Council.

“Our discussions and negotiations must not be confined to these rooms and corridors. They must also be projected into the markets of Kabul, the streets of Paris, the ruins of Aleppo,” he said. “The United Nations cannot merely amount to an observation post for the condemnation of global scourges. It should be a source of effective solutions.”

He indicated that these solutions are needed to address the situations, including the war in Syria, the Israeli-Palestinian conflict, and lack of progress in nuclear disarmament.

But “not all news is bad” for diplomacy, he said, citing the Iranian nuclear issue, the peace accord between the Colombian government and the Revolutionary Armed Forces of Colombia – People’s Army (FARC-EP), as well as the reestablishment of diplomatic relations between Cuba and the United States.

This year, Brazil and Argentina celebrated the 25th anniversary of the Brazilian-Argentine Agency for Accounting and Control of Nuclear Materials, he noted, adding that the Agency is the world’s only bi-national organization responsible for applying nuclear safeguards, inspiring regional and global efforts towards the elimination of nuclear weapons.

He warned against protectionism in trade, for which development depends on. “Protectionism is a perverse barrier to development. It subtracts jobs and makes men, women and families around the world – including in Brazil – fall victim to unemployment and despair,” he said.

On the refugees and migrants crisis, he said that “Brazil is the work of immigrants, men and women from all continents,” vehemently reject all forms of racism, xenophobia and other expressions of intolerance. To the extent of its capacities, Brazil gives shelter to refugees and migrants.

He also highlighted that the Olympic Games and Paralympic Games held in Rio proved that nations can come together in an atmosphere of peace and harmony, and that for the first time ever, a delegation of refugees competed in the Games. “Through sport, we can further peace, fight against exclusion and combat prejudice,” he said.

This was Mr. Temer’s first attendance in the General Debate, as his predecessor Dilma Rousseff, who addressed the Assembly last year, has been impeached.

“Brazil experienced a long and complex process – conducted and with rules established by the Brazilian National Congress and by the Supreme Court – which led to an impeachment,” he said. “Such a process took place in absolute respect to the constitutional order. Impeaching a President is certainly not a trivial matter in a democratic regime. But there is no democracy without rule of law – without rules applicable to all, including the most powerful. This is what Brazil is showing the world.”

He added that a cleansing process of its political system is under way, noting that Brazil has an independent Judiciary Branch, an active Public Prosecution Office, and Executive and Legislative bodies that do their jobs. “The wills of individuals do not prevail over the strength of institutions, nor over the watchful eye of a plural society and a press that is completely free,” he said.

Mr. Temer is among the many leaders who will address the general debate of 71st General Assembly. The high-level segment of the Assembly opened this year with the adoption yesterday of the New York Declaration, the outcome of the first-ever UN Summit for Refugees and Migrants. Made up of all the 193 Member States of the United Nations, the Assembly provides a forum for multilateral discussion of international issues covered by the UN Charter. 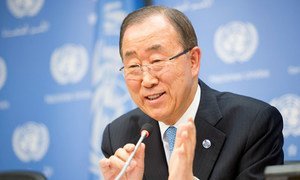 United Nations Secretary-General Ban Ki-moon said today that the global challenges pertaining to refugees and migrants, climate change, and the war in Syria are the major topics that will likely figure prominently in this year’s high-level week at the United Nations.