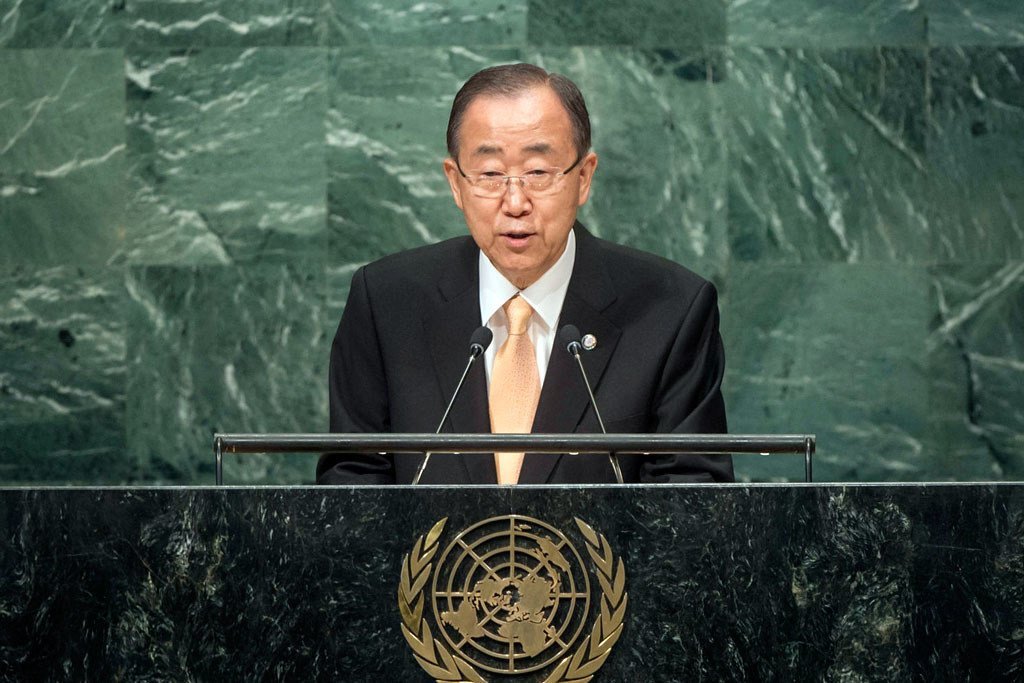 UN Photo/Cia Pak
Secretary-General Ban Ki-moon presents his annual report on the work of the Organization at the opening of the general debate of the General Assembly’s seventy-first session.
20 September 2016
SDGs

“My message to all is clear: serve your people. Do not subvert democracy; do not pilfer your country's resources; do not imprison and torture your critics,” Mr. Ban said in his opening address to leaders from the UN’s member countries.

He added, however, that after 10 years as the top UN official, he is “more convinced than ever that we have the power to end war, poverty and persecution.”

“We have the means to prevent conflict. We have the potential to close the gap between rich and poor, and to make rights real in people’s lives,” he underscored.

The Secretary-General’s opening address, which draws from his yearly report on the work of the Organization, stressed that the Sustainable Development Goals (SDGs) offer a path to a better future, and that with the Paris Agreement on climate change, the “defining challenge” of our time can be tackled.

Mr. Ban underlined that the world continues to confront complex security threats from armed conflict to radicalization which compounded by governance failures, have pushed societies past the brink and threatened social cohesion.

Outlining, in particular, the conflict in Syria, where so many innocent people have been killed by a number of groups, including the Government, the Secretary-General said: “Just when we think it cannot get any worse, the bar of depravity sinks lower.”

“Yesterday’s sickening, savage, and apparently deliberate attack on a UN-Syrian Arab Red Crescent aid convoy is the latest example,” he underscored, and, hailing the efforts of aid workers, added: “The humanitarians delivering life-saving aid were heroes. Those who bombed them were cowards.”

Appealing on all who have influence to end the fighting in the country and get talks started, he said that “a political transition is long overdue. After so much violence and misrule, the future of Syria should not rest on the fate of a single man.”

Referring to the situation in the Korean Peninsula, where the Democratic People’s Republic of Korea (DPRK) recently conducted another nuclear test, threatening regional and international security, while its people suffer and their plight worsens, Mr. Ban urged the leaders of the DPRK “to change course and fulfil their obligations – to their own people and to the family of nations.”

He called on political leaders and candidates to “not engage in the cynical and dangerous political math that says you add votes by dividing people and multiplying fear,” and urged the world to “stand up against lies and distortions of truth, and reject all forms of discrimination.”

He further noted that he was encouraged that the General Assembly recently endorsed his Plan of Action to Prevent Violent Extremism, which he said “can help us tackle the drivers of conflict.”

Refugees and migrants, mainly from Afghanistan, Iraq and the Syrian Arab Republic, wait in a long queue at nightfall, at the Opatovac registration and transit centre, on the border between Croatia and Serbia. Photo: UNICEF/Ashley Gilbertson VII

Looking back at his own term, which ends later this year, the Secretary-General expressed pride that the UN Entity for Gender Equality and the Empowerment of Women (UN-Women) had been established, and that he had appointed more women to senior UN positions than ever before.

“I am proud to call myself a feminist,” he announced.

Mr. Ban also highlighted that UN’s human rights machinery, along with the Human Rights Up Front initiative continues to place human rights at the centre of its work.

Looking ahead, the UN chief called on all countries to continue to pursue reform of the UN Security Council, calling for “a major and much needed reform for fairness and effectiveness in the UN.”

He added that “far too often, I have seen widely-supported proposals blocked, in the name of consensus, by a few or sometimes even just one country,” and questioned whether it is fair for any one country or few countries to yield such disproportionate power and “hold the world hostage on so many important issues?”

Underling that consensus should not be confused with unanimity, the Secretary-General said: “The global public is right to ask whether this is how an organization in which we have invested so much hope and aspirations should function.”

The UN chief also called on the President of the General Assembly, to explore, with his successor, the establishment of a high-level panel to find practical solutions that will improve decision-making at the global organization.

He also urged all countries to cooperate with and work with the UN’s human rights arm; to not put obstacles in the path humanitarian workers; and not to ostracize or threaten UN envoys or and staff when they raise difficult issues.

“We must all be open and accountable to the people we serve,” the UN chief underlined.

Reminding the global body of the power of individuals to change the world, Mr. Ban highlighted the contributions and work of Rebecca Johnson, a nurse in Sierra Leone who contracted Ebola, recovered and went back to serve her community; or Yusra Mardini, a Syrian swimmer who pushed her damaged refugee boat to safety and then went on to compete in the Olympic Games; or Malala Yousafzai, who came to the UN and showed “how one book, one pen and one person can make a difference.” 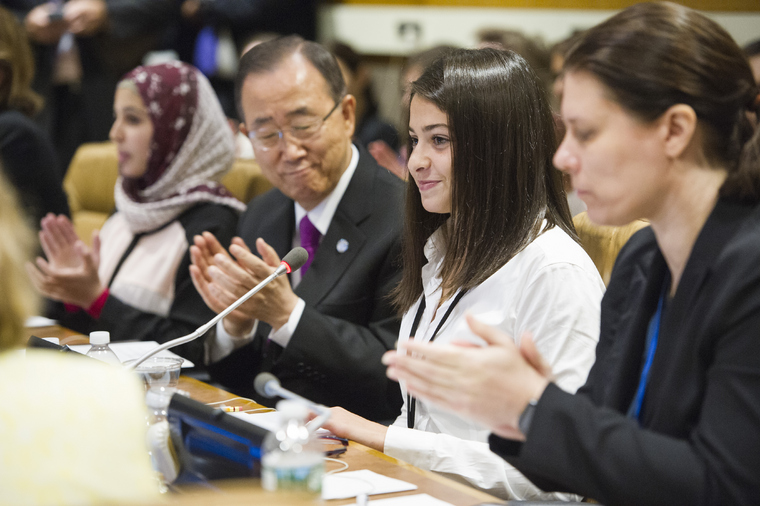 Yusra Mardini (centre right), a young Syrian refugee living in Berlin, Germany, and one 10 refugee Olympic athletes who took part in the Rio 2016 Olympic Games, addresses a high-level civil society event of the UN Summit for Refugees and Migrants. To her right is Secretary-General Ban Ki-moon (September 2016). UN Photo/Rick Bajornas

In conclusion, the Secretary-General expressed that even though a perfect world may be on the far horizon, the route to attaining it “is in each and every one of us.”

“Ten years on, I know that working together, working united, we can get there. I count on your leadership and commitment.”