At summit for refugees and migrants, senior UN officials underline the importance of collective action

Speaking at the opening of the United Nations Summit for Refugees and Migrants, a number of senior UN officials stressed on the importance of the Summit and called on world leaders for collective action to address the global crisis.

In his address at the opening session, William Lacy Swing, the Director-General of the International Organization for Migration (IOM), the newest related organization of the United Nations system, said three elements had made the landmark agreement possible: global trends, trust and timing. Migration is driven by factors including demography, disasters, the digital revolution, technology, North-South disparities and environmental degradation, and is indeed a priority for all Governments.

The world also faces an unprecedented series of simultaneous, complex and protracted crises and humanitarian emergencies. Meanwhile, wide-spread and growing anti-migrant sentiment and policies has led to the “cruel irony that those fleeing terror and conflict are themselves being accused of terrorism and criminality.”

Outlining IOM’s approach, he said migration is inevitable owing to those drivers, necessary if economies and societies are to flourish and desirable if policies are responsible and humane. “To do so will require changing the toxic migration narrative and learning to manage cultural, ehnic and religious diversity,” he emphasized.

William Lacy Swing, Director-General of the International Organization for Migration, addresses the opening segment of the UN high-level summit on large movements of refugees and migrants. UN Photo/Cia Pak

Also speaking at the opening session, UN High Commissioner for Human Rights Zeid Ra’ad Al Hussein underlined that the Summit and its outcomes should be reduced to speeches, feel-good interviews and self-congratulation.

“The bitter truth is this Summit was called because we have been largely failing,” he stressed and added that: “It is shameful [that] the victims of abominable crimes should be made to suffer further by our failures to give them protection.”

The UN rights chief underscored that change is possible if the global community acts collectively on this vital subject. However, he also warned that in many countries, people working to ensure the rights, safety and dignity for all peoples are facing grave challenges “by race-baiting bigots, who seek to gain, or retain, power by wielding prejudice and deceit, at the expense of those most vulnerable.” 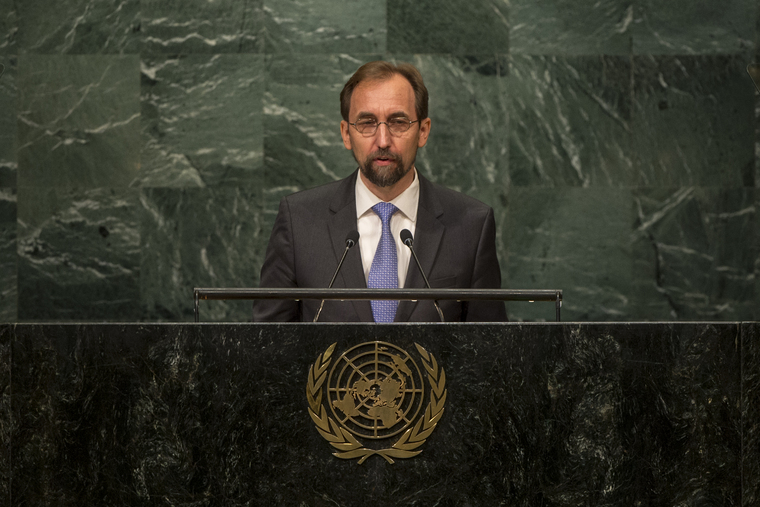 Pointing to the individuals who continue to pursue extremism and divide people, the UN rights chief said: “We will continue to name you publicly. You may soon walk away from this hall. But not from the broader judgement of ‘we the people’, all the world’s people – not from us.”

UN High Commissioner for Refugees Filippo Grandi highlighted that the Summit is an extraordinary opportunity to have real impact for refugees. 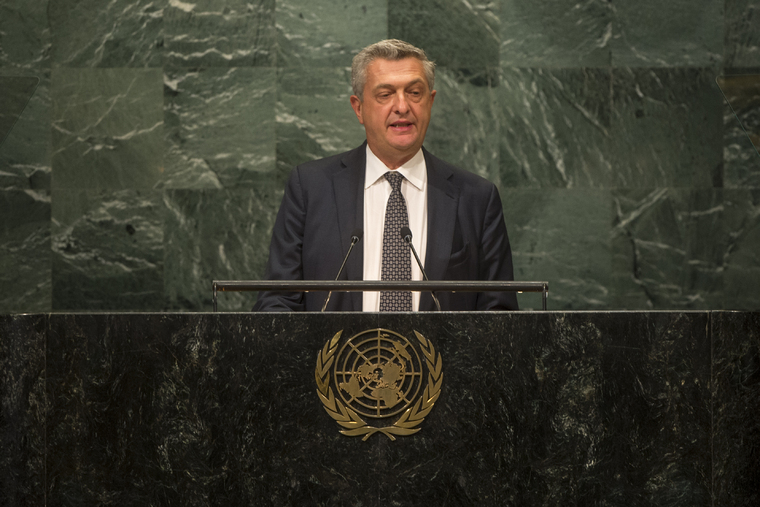 Emphasizing the importance of the New York Declaration, Mr. Grandi said that it marked an unprecedented political commitment and that “it fills what has been a perennial gap in the international refugee protection system – that of truly sharing responsibility for refugees, in the spirit of the UN Charter.”

The top UN refugee official also pledged to work with world leaders to manage forced displacement and called on governments to provide political engagement, funding and concrete acts of solidarity in support of host countries and pursuit of solutions for refugees.

Phumzile Mlambo-Ngcuka, Executive Director of the UN Entity for Gender Equality and the Empowerment of Women (UN-Women), speaking also on behalf of the Global Migration Group. Credit: UN Photo/Cia Pak

Phumzile Mlambo-Ngcuka, Executive Director of the UN Entity for Gender Equality and the Empowerment of Women (UN-Women), speaking also on behalf of the Global Migration Group, noted its growth as it reached its tenth anniversary. The Group stands ready to support Member States, within the framework of the new development agenda, in implementing their existing commitments, as well as those made today through the New York Declaration.

Describing the Group’s approach as people-centred, human-rights-based and gender-responsive, she said it recognized, in particular, the cultural and economic value that women and girl migrants contributed to societies, as well as the importance of specific national policies to protect and safeguard their rights, which are often grossly violated.

In his address, Yury Fedotov, Executive Director of the UN Office on Drugs and Crime (UNODC), said the international community could not allow criminals to exploit the biggest refugee crisis as a business opportunity. Welcoming the Declaration’s recognition that refugees and migrants in large population movements are at risk, and that States must combat human trafficking and migrant smuggling, he said: “It is, most of all, a question of respect.” 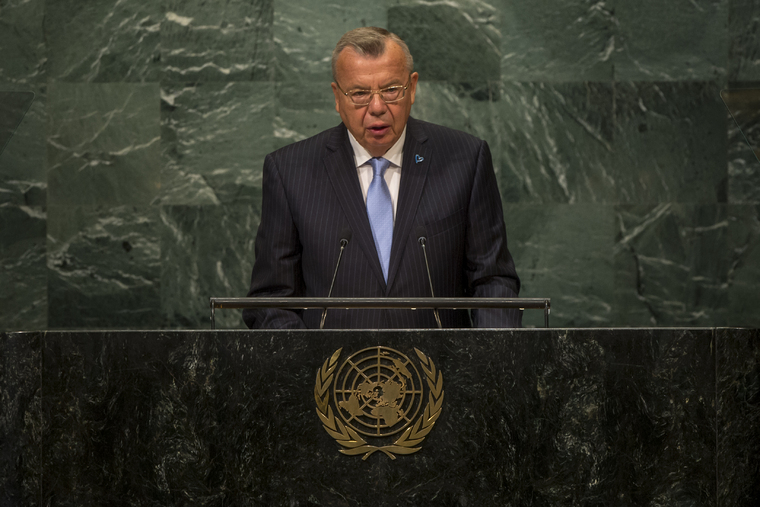 Yury Fedotov, Executive Director of the UN Office on Drugs and Crime (UNODC), addresses the opening segment of the United Nations high-level summit on large movements of refugees and migrants. UN Photo/Cia Pak

Every single person on the move is entitled to protection, he said. Criminal law obliged States to investigate and prosecute crimes, as well as to protect the rights of victims. To date, 156 countries had made human trafficking a specific criminal offence, and while implementation remained a challenge, 142 countries had committed to stopping migrant smuggling. “For justice to be done, we need States to respect their own law,” he emphasized.

For his part, Jim Yong Kim, President of the World Bank Group, said that, in addition to increasing funding for refugees, the Group has dramatically increased its data collection on migrants and has found, for example, that early intervention can have great impact, since half the number of existing refugees had been in their current situation for less than four years. 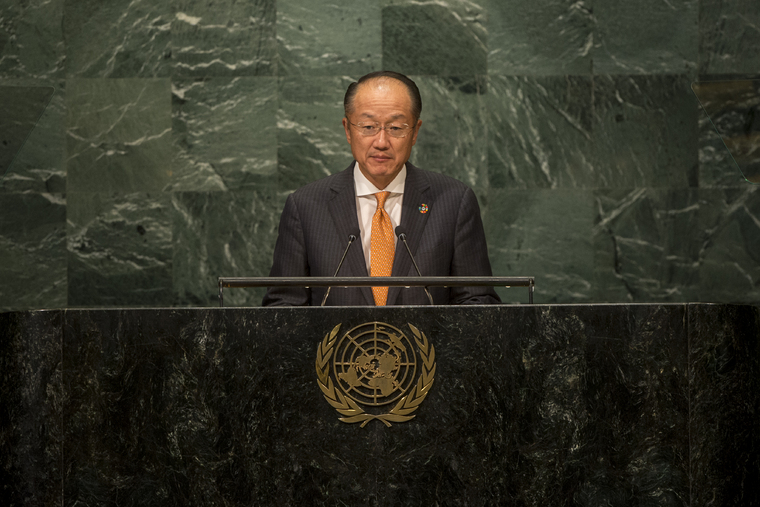 Among other efforts, the World Bank Group was helping host countries to improve the business climate with the aim of creating jobs, and was looking for longer-term solutions such as increased agricultural output in areas where refugees had settled. Much is riding on the Summit as the outcome would have a bearing on everyone’s future, he said.