The United Nations nuclear energy agency has begun constructing a new laboratory that will enable it to better help countries use nuclear techniques, such as application of irradiation to sterilize insects, in the fight against pests, including mosquitoes that spread the Zika virus and other diseases.

The construction is part of the Renovation of the Nuclear Applications Laboratories project (ReNuAL), a plan to begin upgrading the eight IAEA Nuclear Sciences and Applications laboratories in Seibersdorf, Austria, which opened their doors in 1962, according to the International Atomic Energy Agency (IAEA).

“ReNuAL is one of the most important projects in the Agency's 60-year history,” said IAEA Director General Yukiya Amano in a news release. “The laboratories are unique within the United Nations system in providing Member States with direct access to scientific training, technology and analytical services. More than 150 of our Member States benefit from them,” he added.

They play a key role in the IAEA's activities to assist countries with the peaceful uses of nuclear science and technology in areas including human and animal health, food security and the protection of the environment.

“The work done in these laboratories is in high demand,” the Director General added. “When they have been modernized, the Agency's ability to meet the needs of our member States will be significantly increased.”

IAEA Deputy Director General for Nuclear Sciences and Applications Aldo Malavasi said in the news release: “The modernization of the laboratories will allow us to scale up the provision of scientific services and training so that we can more efficiently help Member States meet current and future challenges, such as the Zika virus outbreak.”

The news release said that the project is getting under way with the construction of a new Insect Pest Control Laboratory, due to be completed by the end of 2017. The laboratory is responsible for the development and application of the Sterile Insect Technique (SIT).

Developed jointly with the Food and Agriculture Organization of the United Nations (FAO), it is an environmentally friendly method that has been successfully used for decades to combat fruit flies and livestock pests, such as the screwworm fly and the tsetse fly.

The SIT uses irradiation to sterilize insects in order to suppress pest populations. Sterilized male insects are mass-reared in special facilities and released in large numbers to mate with wild females. As these do not produce any offspring, populations decrease over time.

The technique is also being developed for disease-transmitting mosquitos, like the species that spreads viruses such as Zika, dengue fever and chikungunya. The IAEA and the FAO are working to enhance the method in preparation for pilot trials in different parts of the world. 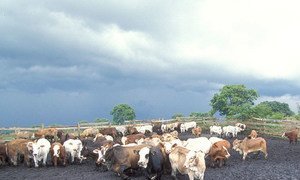 The International Atomic Energy Agency (IAEA) today started a programme to train European laboratory staff on how to use nuclear-derived techniques to detect lumpy skin disease – a highly infectious cowpox virus spreading across the continent.