For too long, quality education has been accessible to the privileged few, but as people become more interdependent, quality education and lifelong learning must be available to all, Secretary-General Ban Ki-moon said today, declaring education a “human right and universal good” at the launch of a United Nations-backed report setting out a plan for the largest expansion of education opportunity in history.

“The report launched today […] is a roadmap to creating the 'Learning Generation.' [It] points to education as the most powerful investment we can make in the future; a fundamental driver of personal, national and global development,” the Secretary-General said at UN Headquarters in New York, where he received the landmark report of the International Commission on Financing Global Education Opportunity, widely known as the Education Commission.

Announced in July 2015 at the Oslo Summit on Education and Development, the Commission is a major global initiative engaging world leaders, policymakers, and researchers to develop a renewed and compelling investment case and financing pathway for achieving equal educational opportunity for children and young people.

At a time of multiple global crises, the crisis in education is eminently solvable

The report, The Learning Generation: Investing in Education for a Changing World, and Mr. Ban himself, points out that with more than 250 million children are out of school and another 330 million children failing to achieve the most basic learning outcomes, the world cannot hope to achieve the promise of the 2030 Agenda for Sustainable Development.

With these shocking statistics in mind and with so much at stake, the report sets out the Commission's four-stage plan that will, among others, aim to generate the reforms and investment that will get every child on track to enter school by 2030 and increase the number of qualified high school graduates in low and middle-income countries from 400 million to 850 million by 2030 – and during the next decade, raise the numbers even further to 1.2 billion:

In his remarks today, the Secretary-General said the report makes the case for investment in education as a prerequisite for economic growth, sustainable development and global stability. Hailing the report as a “major piece of research and analysis,” he underscored: “The international community must be ready to support countries that commit to making the reforms and investments needed to transform their education systems.”

Displaced from their homes

Afghans start their journey to Europe in trucks on this road in Afghanistan's Nimruz Province near the border of Iran in October 2015. Photo: Jim Huylebroek/IRIN

Launch of Report by Commission on Financing Global Education Opportunit

A wide view of the Trusteeship Council Chamber, as Secretary-General Ban Ki-moon (shown on screen) speaks during during a special event for the launch and handover of the report by the International Commission on Financing Global Education Opportunity. UN Photo/JC McIlwaine

Launch of Report by Commission on Financing Global Education Opportunit

Secretary-General Ban Ki-moon (at lectern) speaks during a special event for the launch and handover of the report by the International Commission on Financing Global Education Opportunity. UN Photo/JC McIlwaine

Moreover, education is the key to preventing the spread of poisonous ideologies and violent extremism, he continued, adding: “The extremists and terrorists know this. That is why they have repeatedly attacked schools: in Kenya, in Pakistan, in Nigeria. They fear children, and particularly girls, with books.” investment in high-quality education that promotes critical thinking and universal values is a key element of his Plan of Action to Prevent Violent Extremism.

“Education is a human right and a universal good. As the distinguished Commission Member Kailash Satyarthi told the United Nations: 'Freedom and learning are the birth right of every human being,' recalled the UN chief, noting that in the Organization's global survey that led to the creation of the Sustainable Development Goals (SDGs), more than five million people said education was their top priority.

Stressing that as borders become less relevant, and we become ever more interdependent, quality education and lifelong learning must be available to all, Mr. Ban said: “Our world is not prosperous, if it is too poor to educate its children. Let us all – Member States, civil society, institutions and partners – take up this great challenge and advance these recommendations to build the 'Learning Generation.' Let us hold ourselves accountable for our pledge to leave no one behind. 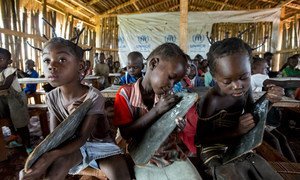 In a new report, the United Nations refugee agency said that more than some six million school-age children under its mandate have no school go to and that refugees are five times more likely to be out of school than the global average.